What is a FRENCH POLISH?

"Hey, Buzz, what exactly is a French Polish?" I'm so glad you asked because this is a multiple choice question.
A "French Polish" is defined as:
A. A stuffed sausage, similar to a Polish kielbasa, but embraced as haute cuisine by Le Cordon Bleu by adding truffle oil to the recipe. It shouldn't be confused with the smaller and distinctly less chic "cocktail weenie". A French Polish sausage looks like this:

B. French Polish is Buzz's family ancestry with an emphasis on the Polish and replacing the French with Slavs and Russian peasants.
C. A French polish is a highly glossy and durable furniture finish invented by the English in the 18th century but perfected by the French and very widespread in the 19th century and hence the name.
Correct answer: Both B and C but the furniture finish is what's relevant to this post.
Here's a French polished 19th century Sheraton style breakfast table: 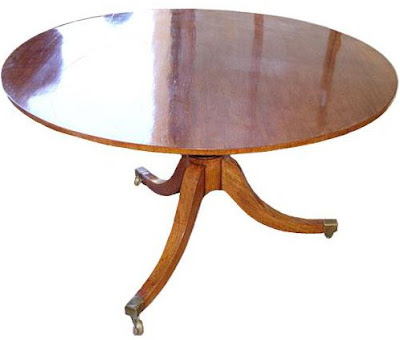 List price: $21,000 USD
Our workshop creates French polishes all the time on custom furniture and restores French polishes on antiques. So there's no mystery to it.
The first thing to know is that French polish is not a product--like French fries--it's actually a labor intensive technique of furniture finishing that produces a tough surface with a glossy and durable finish. And there are varying degrees of French polish (little known antiquarian factoid) from a light sheen to a mirror finish. So not all French polishes are created equal.
Here's a French polished Andre Arbus maple dining table from the 1920's: 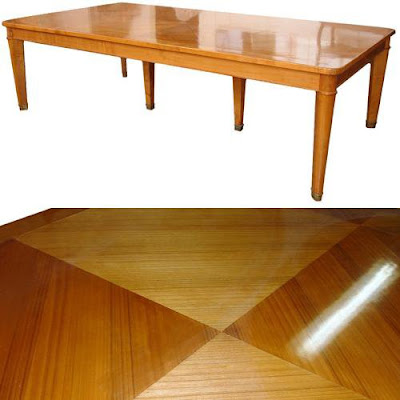 What French polishing is all about is gradually filling the pores in the wood grain so that a reflective surface is created to achieve the desired level of sheen.
The process uses shellac flakes (mixed by hand), different grades of sandpaper, FFFF-grade pumice, 100% extra virgin olive oil, various grits of extremely fine wet/dry sandpaper, wool fabric and some 100% cotton fabric.
As each coat is abraded with a finer material, it is cleaned and sealed with shellac, gradually filling the grain pores until the level of French polish desired is achieved. For a full-on French polish, there are no pores left-just a mirrored glossy surface. Then it's waxed using pure beeswax and turpentine and you're set to go.
Below, an Italian 19th century French polished walnut and satinwood dining table: 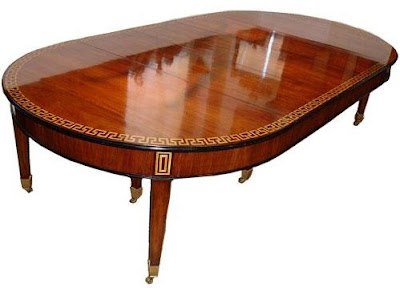 List price: $172,000 USD
What's the olive oil for? Shellac is sticky and the oil is used to grease the pad used to apply the shellac in a uniform and consistent coat.
In order to perfect the French polish, 25 or more passes with the abrasive material, cleaner and shellac are required. And, very importantly, it must be done in a dust free environment or you can't achieve the true mirror gloss of French polish.
Here's a French polished Maggiolini commode, 18th c. Italian: 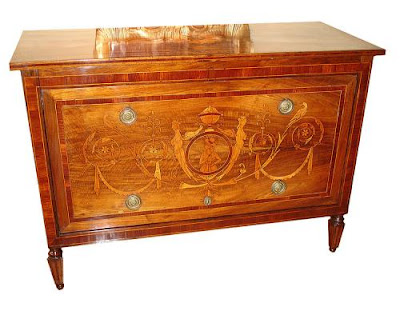 Final comment: Why do you see so many French polished antiques in the U.S. marketplace? Well, because some were created that way and others were refinished in a French polish. From the late 19th century on, especially in America, French polishing was and is very much in vogue.
But why? Because as every antique dealer knows, the general rule is that Americans love shiny antiques in stark contrast to the Europeans who prefer dirtier/matte antiques. So French polishes or modified (that is, not completed to the mirror finish) French polishes are commonplace, although not all of them started that way.
Posted by Unknown at 9:00 PM

Fascinating as always Buzz. Thanks for the lesson on French polish!

I'm wondering if you could tell us a little bit about waxing (here or in another post). And no, I'm talking about your Speedo bikini line.

About 10 years ago I was looking at an antique daybed (nothing precious, it's probably Victorian--it reminded me a bit of the Portuguese beds that Michael Smith was using a lot of the time).

Anyway, the wood was rather dull lucking. I commented to the dealer that I'd love to buy the daybed, but that I liked pieces that had a bit of patina (by which I meant, that nice, weathered mellow shine that so many antiques in stores seem to have).

He said, "No problem! We can have it finished for you." A week later I picked up the bed and it looked gorgeous. Fast forward 10 years and, despite the passing of time, the "patina" has faded.

How can I restore it so that it can look the way it did when I purchased it? I have several pieces that I'd love to give that mellow shine to. I've tried wax, but can't seem to get the hang of it. Is French polish the only way to achieve this look? (I have no idea what the dealer I purchased from used.)

That was funny about waxing.

A modified French polish is certainly a way to get a nice sheen. But it's expensive because it's so time consuming.

In the case of your daybed, if it was French polished before you bought it, you should be able to bring back the shine with paste wax (see below). But if that doesn't work amy best guess is that it may have been CLEANED AND POLISHED WITH A SILICONE-BASED PRODUCT like Pledge.

These products give you a short term shine but over time can destabilize a patina and make it cloudy.

If it was French polished but the finish has indeed been ruined with chemical based "cleaners", then it will have to be refinished and to do it right will cost at least $1000.

But before you invest in a refinish that would require stripping the daybed, get yourself a can of first quality furniture wax and buff it out.

First quality means that the paste wax is made of pure besswax and turpentine. The turpentine cleans the surface and the wax seals it.

My favorites are our house brand, C. Mariani Wax and Harrell's of London, both which you can buy online.

You just take a soft cloth and apply a nice even coat of the wax, let it sit for 5 minutes and then with a new soft cloth polish it to the desired sheen.

The trick to getting a high gloss off the wax is to use an electric polisher (kind of like the ones they use to buff cars). A couple of coats of wax finished off with a polisher should get your piece shining like the North Star.

If that doesn't work, there's no easy way to bring back the shine because a refinish would be necessary. And you should only use a first class shop for that.

Hope that helps and thanks for posting.

You're not too shabby yourself in the comedy department, Buzz!

Considering the price of my daybed (less than one of your silk ties, I'm guessing), I doubt it was French polished. The dealer is an upstanding English fellow, so I don't think he used Pledge. (Plus, the subtle sheen the bed was sold with lasted a long, long time. Don't think Pledge could do that.)

On your advice I just dug up some Briwax from the back of a closet and gave it a whirl on one of the legs. (I think/hope it's similar to what you suggested.)

Presto! With just two coats and some elbow grease, a mellow patina has returned!

I think it's fascinating that Americans prefer shinier antiques while Euros like a dull finish. Perhaps someday you'll do a post about these two types of customers and their quirky preferences.

I'm not a fan of the super shiny French polish look because I find it plastic-like. I can't help but think "polyuroethane."

I prefer a mellow sheen. But when starting with a totally dull piece, I've never been able to wax it in a way that achieves the sheen to the level that I most like. I guess the secret is in the polishing tool and the waxed used.

Thanks for your advice and for posting such interesting stuff. If I ever win the Lotto, your place will one of be my first stops.

Yay! Glad I could help and look forward to you winning the Lotto!

Buzz, I'm in love - with your blog, and your marvelous sense of humor.

It's a great refresher course for many things I've forgotten, and as with this post, a wonderful primer on a variety of others I didn't know the details on.

And the antiques themselves - just to die for, of course.

I'll be in at some point, when my new practice gets to the point where I have clients who can afford them. Or more likely a lot sooner, just to drool myself, since it's been eons.

And in the meantime, you're now on my "must read" list. Thank you for all of your efforts.

Thanks for your nice comments, Wendy. And you're welcome!

Thanks very good for report, I follow your blog