In describing antiques, many folks use the terms "Regency" and "Regence" interchangeably. Big moos-take. Talk about stepping in it. P.U.! 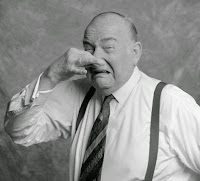 No, this is NOT a picture of me.  But people who make this mistake are telling you that they don't know squat about antiques and need to learn to PIPE DOWN once in a while. :) You'll have plenty of other opportunities to demonstrate you went to Cal State Chico and aren't the brightest bulb in the chandelier throughout your life. That was a joke so please don't text or twit me about being "dissing" your alma mater.

Regency antiques come from England and date to around 1811

In England, the Regency period began in 1811 when George IV was named "regency" in place of his insane father George III, showing here: 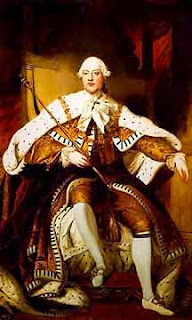 Interesting factoid: George III was not only acting cuckoo but his urine was coming out blue. "Rhapsody in Blue" was probably named for this (at least I'd like to think so). And besides, if my pee was blue, I'd be acting like a lunatic too. I can barely keep it together when I get a hang nail). Today we know that the poor guy just had a disease known as PORPHYRIA (poor-FEAR-e-uh). Por guy. Or maybe he was just nuts--I forget.

Another interesting factoid: King George III's lips. Was King George a pioneer in lip augmentation? His are so big, plump and luscious! Very Angelina Jolie, right? I've Googled "Beverly Hills dermatologist of George III but came up with nothing). So I'll just let his lips speak for themselves: 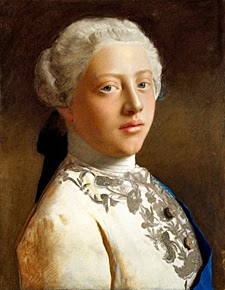 In Beverly Hills, people kill for lips like Geogie's.

Where was I? Oh yeah, Regency England. So when Hot Lips was deemed unfit to rule, his son, the Prince of Wales, ruled as Prince Regent. In 1820, on the death of his crazy dad, the Regency ended and the Prince officially became King George IV, showing here: 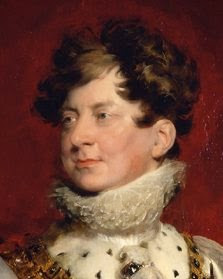 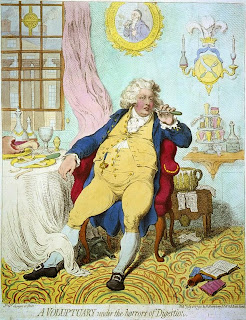 I'd like to say that everyone lived happily ever after but nothing could be further from the truth. In the 10 short years of his reign, George IV succeeded in becoming the most despised monarch in English history. Commentators describe him as grossly self-indulgent, faithless, selfish, extravagant, spoiled, histrionic, a tub of lard, a gambler and a sexaholic. He died in 1830 to the widespread cheers of his subjects. Very sad.

Although the Regency period technically ran from 1811-1830, when  furniture is described as "English Regency," it really refers to a longer period than just the reign of George IV: my feeling is that Regency furniture dates from about 1795 to 1837 (so that would include the latter part of the reign of George III, the reigns of his sons George IV, as Prince Regent and King, and William IV) because this longer period was characterized by distinctive trends in British furniture, architecture, literature, fashions, politics, and culture. Think Jane Austen.

In this way English Regency sits as the transitional period and style between the Georgian and Victorian design periods.
Posted by Unknown at 12:55 PM No comments: