DECORATI ACCESS MAGAZINE recently published my thoughts on How Antique Legs Can Help you Identify Periods & Styles. And it got a really great response. YAY.
One of the Decorati readers (thank you, Jenny S.) asked if I would post some comments on antique FEET and what they can tell you.
OK, so here goes. First, legs tell more than feet. But feet styles also have something to say as well. And when we talk antique feet we need to also talk casters, since they're often the feet in question.
So let's look at how the style of an antique foot can help you identify the period of the piece. But keep in mind that feet, as with legs, cannot definitively date the piece for you. Why? Because classic feet and casters have been reproduced since their respective introductions dating from the 17th to the 19th centuries.

Here's a turned toupie foot with a foliate detailing "in person" in our Gallery: 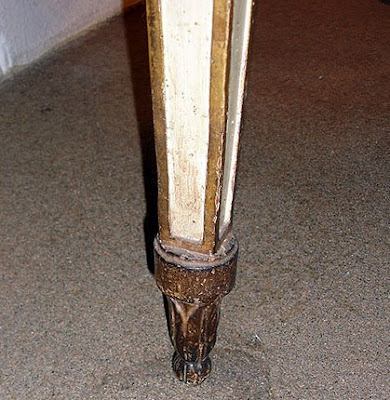 And here's a ball and claw foot from one of our English Georgian chairs: 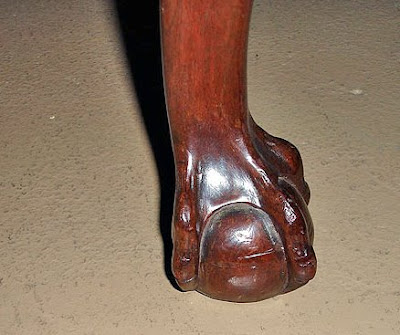 Here's a spade foot and also a brass caster: 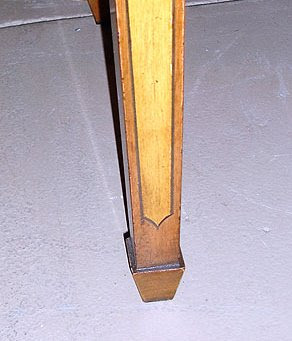 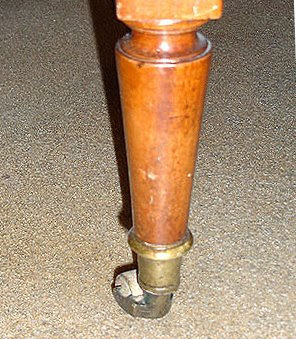 The block foot immediately says early 17th century and later. The flattened bun foot should tell you English William & Mary, early 18th century. The shaped bracket foot is Baroque and Georgian. The curve of the ogee bracket tells you we're in the rococo and so mid-18th century.
The toupie foot is a tough one since it appeared in various periods from 1800 to 1900. The "Spanish" also called Braganza foot is baroque to transitional rococo.
The pad foot screams English Queen Anne while the trifid and ball & claw both say English Georgian.
A squared and tapered foot says Neoclassical like the feet on this late 18th c. demilune parquetry  commode: 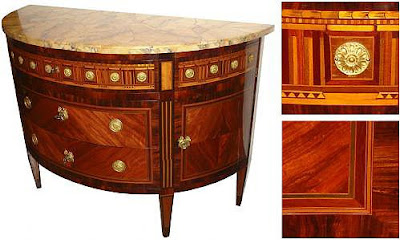 And then we come to the casters. Note that leather casters were introduced in the Louis XV period but you see very few original leather casters surviving to this day (the leather rollers broke down relatively quickly). They were followed with the block caster with brass wheels in the late 18th century (on neoclassical legs), and the brass and porcelain casters in the mid-19th century.
I mentioned earlier that you can generally tell more about an antique by its legs than by its feet. Why's that?
That's because the feet of an antique are always the first to "go", meaning destroyed by dry rot, moisture, general wear & tear, and various forms of torture (never drag an antique across the floor or you'll quickly learn how fast a foot can snap off or crack). Plus feet were regularly replaced to update pieces over time, even if they were still in good condition.
Nonetheless, every part of an antique has a story to tell if you take the time to closely examine it, do your homework, and just listen.
Posted by Unknown at 10:00 AM

I have a footed chair with legs like none of the above! LOL! Looks more like a huge tiger foot(no claws!) without the ball. Trying to get a date on some old chairs I have. Thanks for any info.