IS A TANTALUS THE SAME AS A CAVE À LIQUEUR? 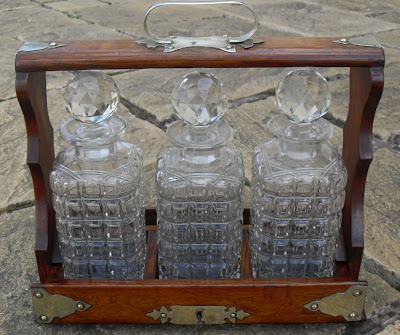 Nope, a tantalus ("TAN-tuh-lus") is not the same as a cave à liqueur ("CAHV ah lik-COOR").
But to understand why, we first need to understand the difference between a liquor (that a tantalus holds) and a liqueur (that the cave à liqueur holds). Liquors are alcohol-based beverages that are distilled (e.g., like gin or Scotch whiskey) while liqueurs are fermented (e.g., like brandy or crème de menthe). 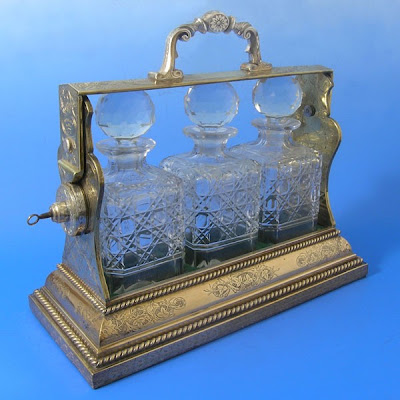 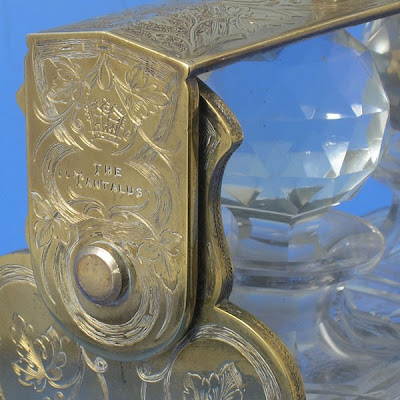 Liquors are not usually sweet to the taste like most liqueurs are (in fact, most are downright nauseating). That's why delinquent teenagers raised on Mountain Dew totally dig liqueurs (in high school, I was partial only to the cheapest peach brandy and my favorite spot to imbibe was underneath the bleachers). Liqueurs get their sweetness because they're flavored with fruits, spices, nuts, herbs or seeds. 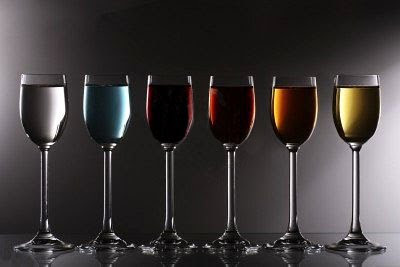 Liqueurs are often served after dinner (but only on rare occasions under some bleachers) while liquor is often served before a meal. Ok, ok. A lot of people love liquor before, during and after a meal (including breakfast).
PUBLIC SERVICE ANNOUNCEMENT: Please drink responsibly. And if you're under 21, please drink next to your local jail because that's where you'll be spending the night, you reprobate.
Now that we know our liqueurs from our liquors, let's talk about how a tantalus differs from a cave à liqueur:
A tantalus is an open-work rack that holds large cut crystal liquor decanters (usually three but the smaller ones hold two). What makes them interesting, at least to me, is that the tops of the decanters are secured by a locking mechanism so that the stoppers can't be removed unless the tantulus is unlocked. Look at the progression here from locked to unlocked and showing the lock itself: 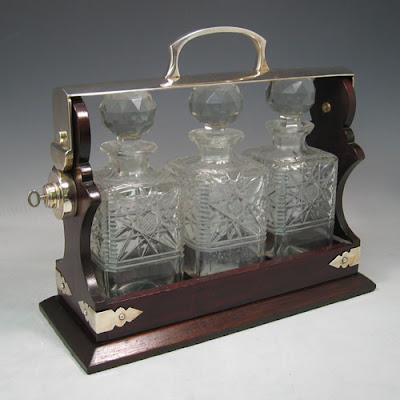 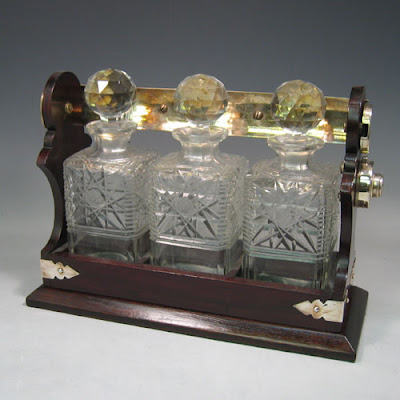 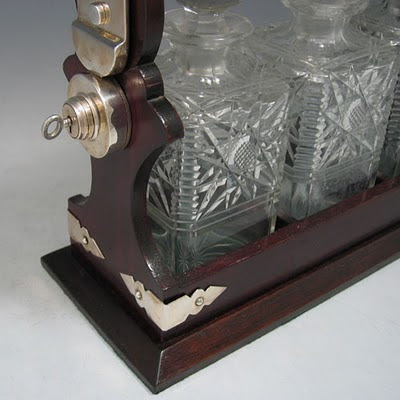 Why the name tantulus? Why not? LOL. Ok, no more smart-alec remarks.
The tantalus gets its name from the Greek mythological King Tantalus. Since to be tantalized is to be tempted with something you can't have (the story of my life), King Tantalus was been condemned to Hell (which is almost as hot as Palm Springs but it's not dry heat)-and if that wasn't enough, he was forced to stand forever in a pool of water that, when he bent over to drink, would recede. And hence the name.
ASIDE: For those of you wondering: "Wouldn't this story make more sense if the king had to stand in a pool of vodka, Scotch, or a huge Whiskey Sour?", please apply to MENSA immediately. 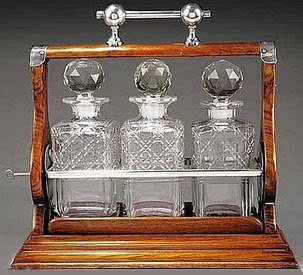 Tantaluses were popular in England from the mid 19th century through the Edwardian period (early 20th).
A cave à liqueur is a liqueur caddy that has diminutive crystal liqueur decanters (typically 4) along with a set of small glasses (typically 8). 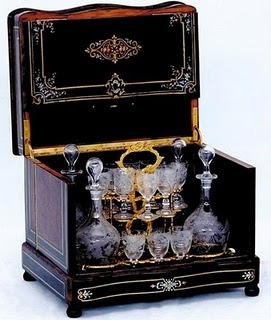 Most cave à liqueurs are rendered in brass or ormolu with glass panels (sometimes etched and sometimes painted with gold accents) on all sides and the top. But some have cases of wood or boullework with blind panels, like the Napoleon III red tortoiseshell and brass one below: 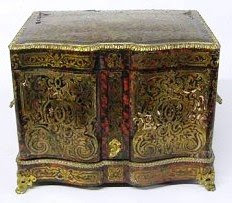 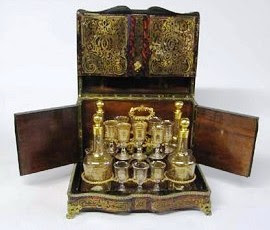 Some have a conforming brass tray that pulls out for serving while others are accompanied by an under-tray that can also be used to serve. Here's a beautiful example in Baccarat crystal: 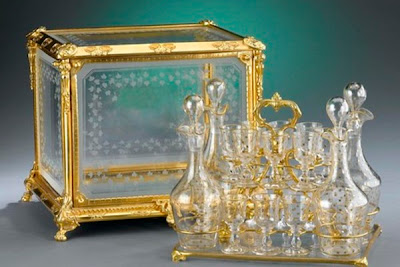 Most cave à liqueurs have locks just like tantaluses. There's a common misconception that the locks were there to restrain the family lushes from taking a nip or two. But the truth is that tantaluses and cave à liqueres were locked to prevent the household staff from taking swigs and then adding water back in to cover their "crime". Yes, even then it was hard to find good help.
Posted by Unknown at 10:56 AM 4 comments: