WHY IS EVERY OLD ENGLISH ANTIQUE CALLED GEORGIAN? 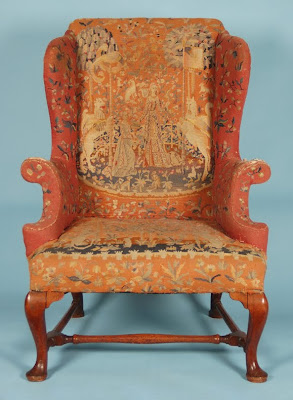 "Why is every English antique called Georgian?" What an excellent question! Oh what the hell, why be diplomatic at this point? That's an incredibly moronic question. But I do understand why someone would ask it. 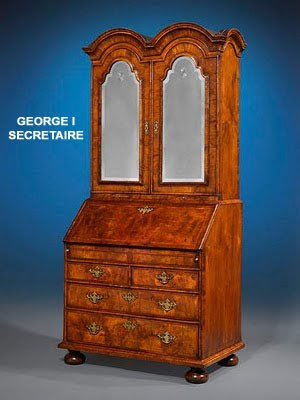 The Regency period (that is, the English period that FOLLOWS Georgian) starts around 1811, when George III was mentally incapacitated and his nit-wit son, the Prince of Wales, was appointed Prince Regent. The Prince Regent became George IV on the death of his poor deranged pop in 1820.

Watch the movie "The Madness of King George" for details. It's really good. Here's actor Nigel Hoffman as George III when he was nuts: 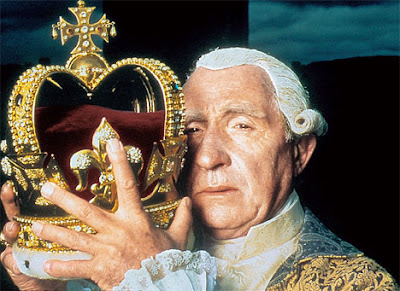 Semi-interesting factoid: George IV was apparently quite the jerk. Very few people (even at his death) had anything nice to say about him. He was lazy, a glutton, a womanizer, a gambler, a tub-of-lard, and a heroin addict. Wait, that describes most of my friends! Anyhow, George IV was one of England's most despised monarchs. 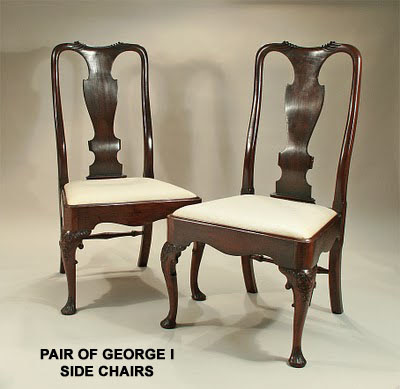 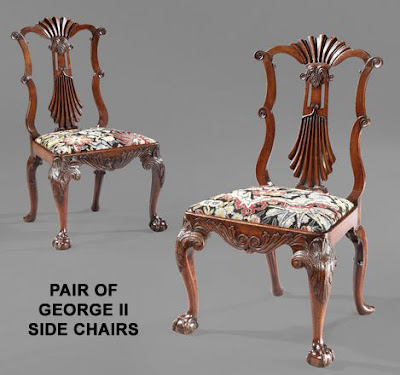 With that said, you can see that the term "Georgian furniture" still covers a vast period of time: over 100 years of history, encompassing most of the 18th century as well as the early part of the 19th. And hence the misunderstanding that all English antiques are Georgian.

Handy antique tip:
If you get cornered and are compelled to describe a random antique piece of English furniture, if you say it's "Georgian", there's a pretty good chance that you'll be right! And even if you're not, 99.9% of people wouldn't know Georgian if it bit them in the rear. So you'll probably look knowledgeable whether you're right or wrong! But read on and you'll understand what Georgian furniture is and is not. 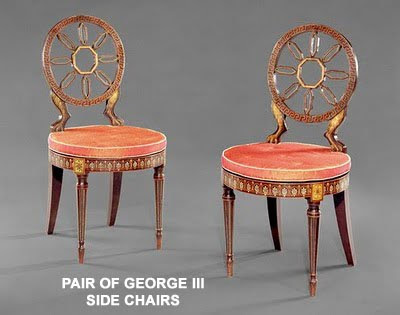 At this point you may be wondering: "Hey Buzz, if George I, II and most of George III's reigns are all called Georgian, then how come George IV's reign isn't also called Georgian?" And the answer is, "Because I says so." In other words, hey, I don't make up these rules, I just report on them. Or as we used to say in high school (or in my case to this very day), "Like it or lump it." Lovely, huh?

Georgian furniture is generally characterized by a simple elegance that is more stately than earlier English periods like Jacobean, (pronounced "JACK oh bee in" and NOT "juh COE bee in" which makes me crazy) (1600-1625) and Queen Anne (1702-1714).

For instance, rather than the extensive carvings that characterizes Jacobean furniture or the frequent use of cabriole legs in Queen Anne furniture, Georgian furniture saw more conservative, imposing designs that reflected the English return to a more neoclassical sensibility. Here's a good example of carved Jacobean furniture, this piece a folding "monk's bench": 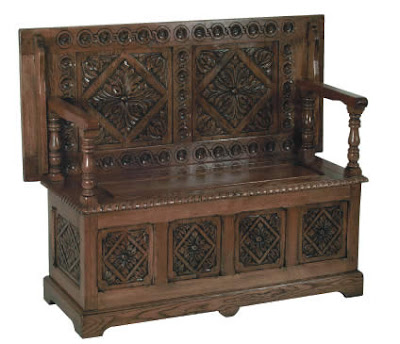 And yet when compared to the French Neoclassical Louis XVI and Empire periods, Georgian style is clearly simpler, reflecting England's more conservative/understated penchant (that's a generalization of course and stands in stark contrast to English Palladian furniture which is completely lavish and over the top, but I'll explain that in a later post). 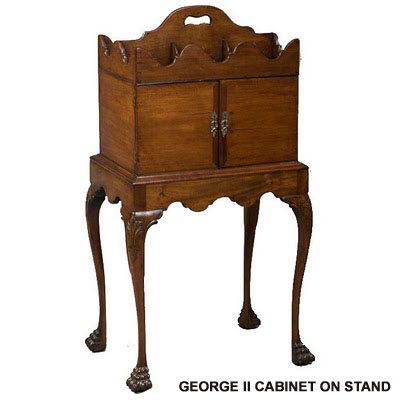 I should mention that the three phases of Georgian period furniture are often hard to identify from each other because often overlap. For that reason, examples of each Georgian phase are often really transitional amalgamations and sometimes look downright anachronistic. Look at this early Georgian wing chair--you might think that it's Mid-Georgian because of its cabriole legs, right? But it dates to George I: 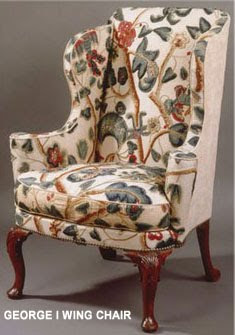 As a general rule, however, it's safe to say that as the 18th century moved from Early Georgian to Mid Georgian, mahogany replaced walnut as the favorite wood of choice. And the George II taste favored lighter color palettes, designs and decoration. And then as George II period was eclipsed by George III, there was a pretty strict return to neoclassical design, with straight lines replacing the curves of the Mid-Georgian period. Again, a generalization but then with Georgian furniture you need to generalize. 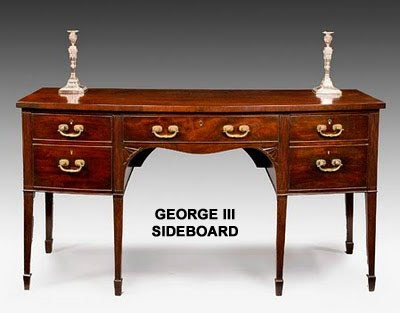 Examples of distinct characteristics of George I/Early Georgian furniture would include a general absence of intricate carvings as well as the use of turned or square-tapered legs instead of cabriole or French baroque style. Even so, Georgian cabinetmakers employed a great deal of knowledge that was developed in other periods and styles, including the classic gate leg table design that finds its origin in the Jacobean period. Ornamental inlays were preserved, the most common among them being crossbanding, as shown here: 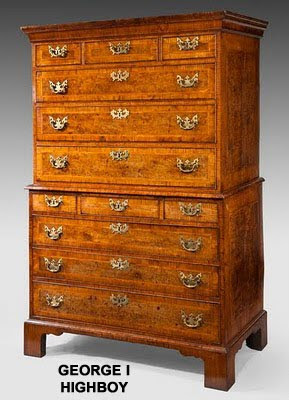 By the mid 18th century England, the Mid-Georgian period, reflects the transition to the rococo style of France, but interpreted by the English in a much more subdued and staid way.

The designs of Thomas Chippendale's Directory of 1754 reflect the English taste for the French rococo including Chinoiserie. This represented something of a temporary departure from the classical order and a move towards more whimsical designs, and frequent asymmetry, as shown here: 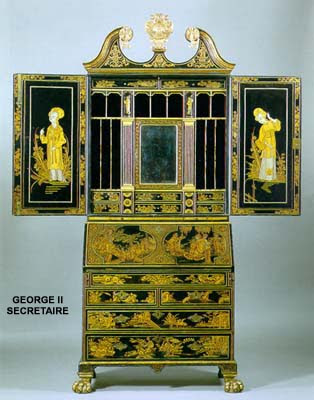 As the 18th century moved into its last 4o years, we see tremendous innovation in furniture design (such as the sideboard) and the third phase of the Georgian period, George III (Late Georgian).

Late Georgian style is primarily neoclassical as was developed by the likes of Robert Adam. Adam rejected the curves of Rococo and evolved a new style characterized by symmetrical lines, attractive lighter proportions, geometric shapes and an abundance of neoclassical motifs. Take a look at this Robert Adams "Etruscan" room in Osterley Park House, circa 1761: 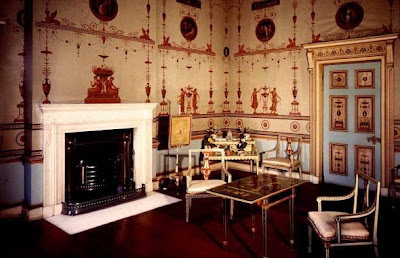 George Hepplewhite popularized Adam's designs in his 'Guide' of 1788 while Thomas Sheraton heralded a new era with his 'Drawing Book' of 1791-1794. Furniture of this period is characteristically light and elegant. Straight, tapering legs are typical of Late Georgian chairs, as are geometrical forms and the use of Greek and Roman patterns. Look at the legs of this George III chair and the neoclassical pediment on this George III breakfront: 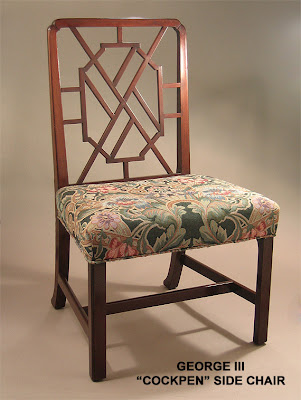 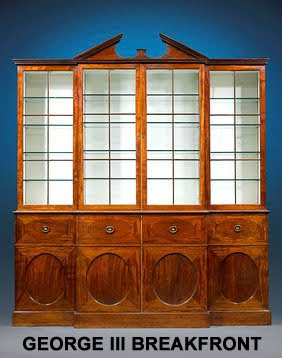 I just wanted to tell you how much I am enjoying your design style series. I use the present tense of "enjoy" because I keep coming back and rereading your last several posts every 2 weeks or so. I now feel schooled in a variety of English styles. And thank you for telling us about the styles in shirt-sleeve English, making an often confusing subject accessible and discernable to those of us who don't have much experience in antiques. Now when I shop for or have a discussion about a particular antique, I know precisely what the style is, from which era it hails, and from what material the piece is most likely made. In short, I feel like I can hold my own. Thank you, thank you, thank you! I look forward to your next lesson.