THE GENESIS OF THE COFFEE TABLE 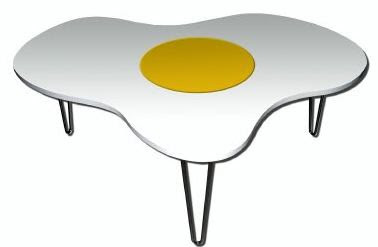 I get a lot of flack for saying that there are no antique coffee tables.
I get even more flack from "antique" dealers (better known as thrift shop owners) who sell "antique" coffee tables all the time. As much as they dislike the truth, the tables they're selling are at best vintage and never really antique (meaning over 100 years old).
So, to finally put an end to all of those poison pen emails and semi-death threats I get on this topic, here for the first and last time is a history of the furniture form we call the coffee table.
The genesis of the coffee table dates back to the first quarter of the 20th century (get it, VINTAGE). You can see the emerging form here as a tea/serving table in this 1920's dining room photo: 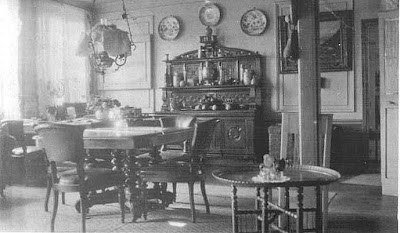 Lore has it that one J. Stuart Foote, the president of the Imperial Furniture Company, invented the modern day coffee table in 1920. It's said that he cut down the legs of a table he had in his warehouse and realized it would be perfect to put in front of a sofa. Kind of like this farm table that's been cut down to work as a coffee table:

Similarly, he felt that this long and low table would be much more convenient than the typical side and tea tables for holding guests' coffee and tea. And he was right!
As importantly, the coffee table's emergence can also be traced to the evolving housing revolution of the '20's where smaller bungalow residences were being built for the middle class. 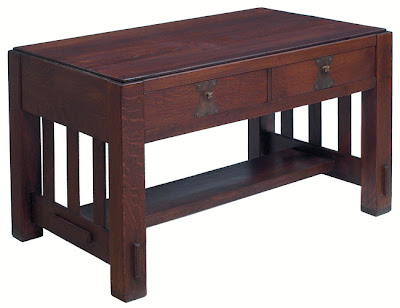 These homes increasingly had separate and newly conceived "living rooms" and "dens" where people entertained. Plus social entertaining itself was becoming less formal. Up until this time, guests were entertained in the salons, drawing rooms, parlors, and, in the 18th century, even in bedrooms (with the lady of the house lying propped up in bed fully dressed for the occasion and in full makeup). This kind of formal entertaining often had guests resting their cup and saucers in their laps while conversing.

Of course, even in the era of formal entertaining and up through the Edwardian period, homes had higher tea tables (that often tilted so they could be put against a wall when not in use) and lower small teapoys (to hold the silver service and/or the tea/coffee pot) and the guests were served by the household staff (usually the butler plus the first footmen and sometimes the second as well). 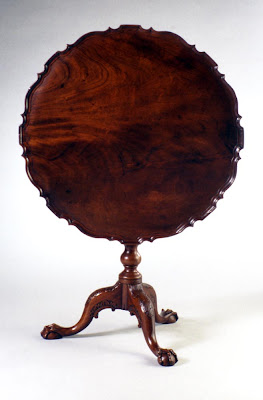 You'd be surprised at how many staff persons were employed in the typical manor house of the 19th and early 20th centuries. Even a modest middle class home would have has no less than three and as many as ten full time servants at the time. 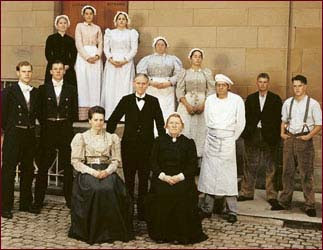 INTERESTING FACTOID: "Footmen" (which were very high on the pecking order of servants) were hired based on two solid principles: good-looks and height. In fact, to show off their gorgeousity, footmen were dressed in ostentatious livery costumes like these: 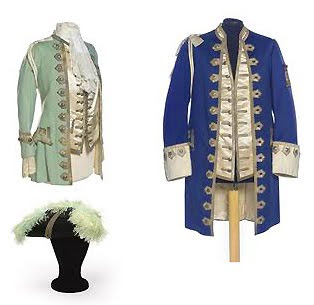 In the best households, the footmen were perfectly matched in height and trained to act in unison, knocking on doors or serving dishes with a synchronised flourish.
And just when you think this can't get weirder: It was critical that all footmen have fine and pronounced calf muscles. In fact, it was so important that they often wore ‘falsies’ (kind of like today's Spanks)-padded white hose to make their calves more attractive. Isn't that lovely? Funny to me how these days rear ends have replaced calves in importance. Or have they? Something to ponder. 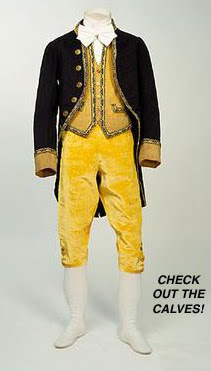 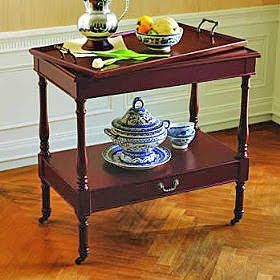 And then we come to the 1920's where the burgeoning middle class began purchasing homes with separate dens and living rooms that had to be filled with furniture for the newly casual entertaining. 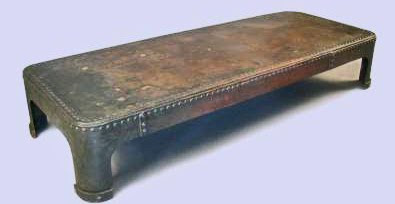 The problem the 1920's middle class had was that they had little or no staff at all to serve the coffee and tea.
And so the tea table and trolley naturally morphed (with the help of J. Stuart Foote) into the coffee table.
This new piece of furniture was perfect for "self-serve" entertaining--and as that became the norm, the use of the coffee table became more widespread and popular to where it is today--practically ubiquitous (good word, huh?). Here's a stylish 1920's Cuban mahogany coffee table by Danish designer Johan Rohde: 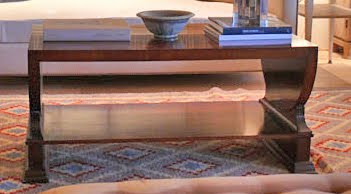 So interesting! I knew a coffee table was not and could not be more than a few decades old. Now you give us the reasons. The whole post is wonderful. Bravo.

Thanks for addressing the 'coffee table' issue. It is probably the number one fallacy out there in terms of antiques versus vintage. Not to say that an antique table cannot be lowered - but it raises the issue of cutting down originals to fit in with modern desires.

In that respect, it puts the vintage dealers at an advantage - which is fine in the case of coffee tables, but the word does seem to cause a lot of confusion, doesn't it?

Ultimately, however, as an investment and in terms of quality - original period pieces are 'best' for a multitude of reasons. Unless of course you are looking at extremely high-end custom made one of a kind pieces.

Finally a common sense approach to the coffee table
issue...for years I tried to explain to sometimes doubtful sometimes irate people in my shop who wanted antique coffee table that it simply did not exist and that furniture exist in the context of needs, customs and social conditions of a specific period.
So thank you, and I hope theses annoying people read your blog.

Great history lesson, as always! Now if you could get clients to stop asking for an antique TV stand that would be great. And I also have clearly decided what I have found lacking in my household - footmen. LOL. Always fun and informative, sir.

this is my absolute favorite topic! (Coffee tables, not calves. calves rank in at number four, after deviant footwear and drop-front secretaries...) A coffee table is one of the silliest things to design in an antique style, precisely because it is such a new form. I did a lttle research on this a while back, but no one was able to give me as succinct and direct history as you did! thank you, Buzz! Keep posting!
RK

I always wondered what the purpose of footmen were, now I have a better idea...They were there help the Mrs. of the house with her "vapors" before the doctor arrived. Lol.