Word of the Day: "LACCA POVERA" 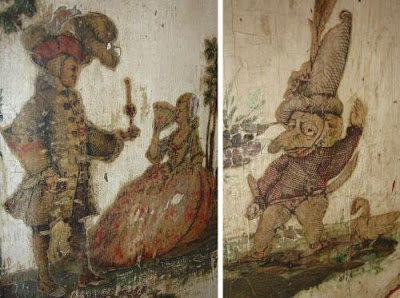 Lacca povera is a decorative finishing technique, often used on furniture in the 18th c., that is essentially an Italian interpretation and perfection of French decoupage. 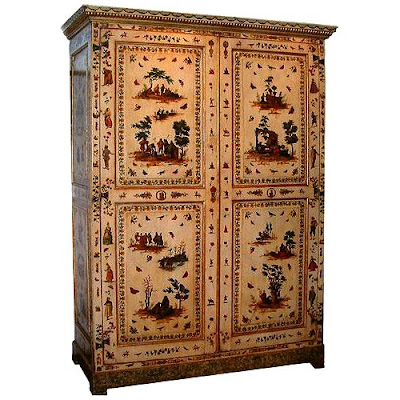 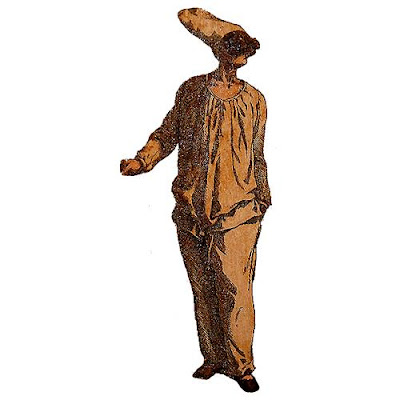 List price: $249,350 USD
Lacca povera is known by many other names such as arte povera, lacca contrafatta and, in England, "decalcomania". But regardless of its name the technique was the same: it was the art of decorating a furniture surface (or it could be a vase, a screen or even a carriage interior) with paper prints that were cut out and adhered (with fish glue) to a prepared  and painted surface and then varnished 8-10 times over. The many layers of applied varnish made it difficult to distinguish between a lacquered surface and a lacca povera technique.

Lacca povera was probably first practiced toward the end of the 17th century and became especially popular during the 1720's in Italy and other European countries, where it was used continuously throughout the 18th century. It reached its zenith and was especially popular in Venice during the Rococo period with its fondness for Chinoiserie and its expertise in whimsically interpreting the mysterious "Orient." 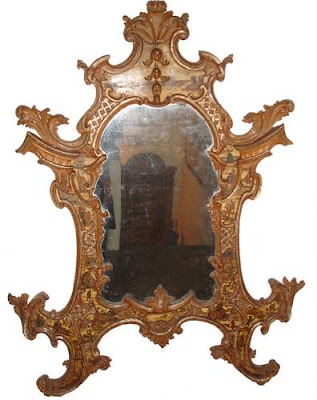 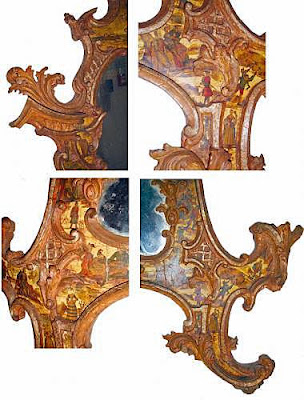 With the mania that was Chinoiserie, lacca povera was intended to imitate the look of the more expensive lacquered Coromandel (Chinese screens exported through the Indian port of Coromandel) techniques. But today and somewhat ironically, lacca povera antiques are now comparable in value if not more valuable than many Chinoiserie pieces). But because it was originally done to create less costly pieces than Chinese lacquered, it was called "the poor (povera) man's lacquer (lacca)".
Posted by Unknown at 6:20 PM

Hey Buzz-
Is Lacca Povera considered less valueable than Chinoiserie because it was glued on paper, rather than hand painted? Were the paper cut outs hand drawn? And also- I known that you do amazing reproduction Chinoiserie work at C. Mariani Antiques, but do you ever do any Lacca Povera? Just want to know if I should start saving magazine clippings for our next custom lacca povera piece with you.

Here are the answers:

However, the Chinoiserie lacquer process was much more labor intensive (and extremely durable) and so its value is also still significant.

But the thing to remember is that Lacca Povera was created as a less expensive alternative to Chinese lacquering, and had a more arts/craft/slightly rustic yet elegant feel. Chinoiserie was and is much more formal.

The process of Lacca Povera was interesting and fun. Lacca Povera was not actually glued on paper but was rather paper that was glued (and then varnished over) onto the prepared surface of an object (e.g., gessoed and painted wood furniture-or it might be a glass vase, canvas screen or other surface).

But you are correct that while Chinoiserie was all hand painted, Lacca Povera was not.

Many people think that Lacca Povera designs were hand etched or sketched, but in fact they were commercially printed on sheets of paper, sometime tinted and sometimes not. The person (this could be a craftsman or in many cases upper class women who participated in craft circles much as they did for sewing and needlepointing), would carefully cut the images out. And sometimes they would go on to hand color them before the gluing and over-lacquering. These latter stages were also often done by third parties, especially for the hobbyists.

C. Mariani can indeed create custom reproductions of both Chinoiserie and Lacca Povera pieces, using the same old world techniques of our skilled workshop artisans. The resulting pieces look quite spectacular and can be done to your (Jeffers Design Group) custom specifications. The only thing to keep in mind is that our modern pieces are "antiques in the making" and therefore don't appreciate at the same rate as real antiques. But then you probably knew that!!

Hope that helps and thanks for your question.