Louis (pronounced "LOO-ee") XIV is in the baroque style (1620-1715) and is generally grand, heavy, and symmetrical.
In between Louis XIV and Louis XV is the Regence style (1715-1723), when Louis XV was the dauphin but not yet king and hence a “Regent” temporarily ruled in his name. Regence is a transitional style from baroque to rococo, where furniture becomes lighter and more fluid. The Regence period is followed by the Louis XV period.

Sometimes people confuse the three royal "Louie's" of France with Louie, Dewey and Huey, the nephews of Donald Duck. Care should be taken not to make this error. 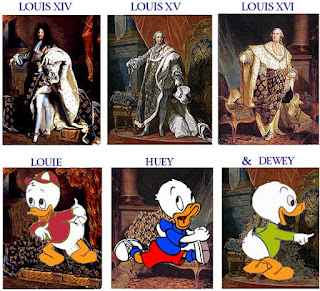