This years 2017 San Francisco Decorator Showcase dazzles and really is a "must-see!" The Opening Party was a blast and a half especially because I went with my OH SO TALENTED Gallery Manager Riana Lum: 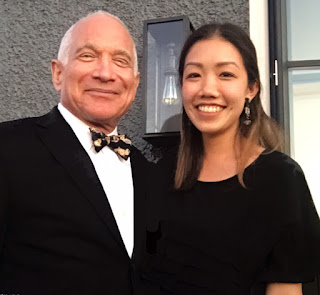 Riana and I both marveled at the new ideas, creativity and new young talent that was on display at this year's house. It's at a spectacular home at 2698 Pacific Avenue and marks 40 years since the first showcase in 1977. The Showcase runs through May 29th. So get over there before you miss out!

Kari Mcintosh Design showed how the best rooms are unexpected, mix modern with traditional and make you want to steal every idea and most of the furniture and accessories:

Look how she juxtaposed a vintage glass and bamboo desk, with an ancient Roman bust of a child, antique books, malachite obelisks, 1970's vintage leather chairs and the wildest polka dot wall paper that wrapped the entire room in fun and whimsy. She also took some risks with a chandelier that was, uh, flocked and brass. So unexpected --and yet worked perfectly in the room!


She also incorporated a simple etagere bookcase that was directly under an antique inspired starburst giltwood mirror (very 18th century glam) which I know is in the best taste because I have one just like it at home! Who knew Kari and I both had such great a great eye? And the 18th century style upholstered fauteuils (pronounced "FO-toy" because the correct way to say it is really hard. Think of Elmer Fudd, Fee Fi Fo, Chop Suey, Oy Vey, Ah Men and Latoya Jackson, then scramble them together and blurt out "Fuh--ahh-oy!-toya!" Or Fu-oh-tuey but say the tuey more like toya and you're practically Parisian!) The fauteuil is the armchair showing below that Kari used from her own collection:


And here's a photo of Kari with Ryan Gosling...oh wait...I don't recognize the old fart next to her but I'm sure he's one of the most important and delightful antique dealers on earth. :)


Then I have to talk about the designer who steals the show every time she's in one. This is not a joke and it certainly is not because she used ZERO of our pieces this year (I felt like a shunned Amish character from Return to Amish on TLC). That person is Cecilie "Steal the Show" Starin.


The fact is that when we walked into her Master Bath space, I turned to Riana and gasped at the sparkling multi-colored bubble chandelier in what appeared to be a stark cement space punctuated only with a bright white porcelain, automatic toilet (it opens itself, sprays you clean, brushes your teeth and polishes your shoes for an upcharge) and screamed "Go Sit on the That Toilet!" Sadly my photos couldn't fit the chandelier which does an injustice both to poor Riana (you can tell she was posing by the glass of wine in her hand) and the chandelier: 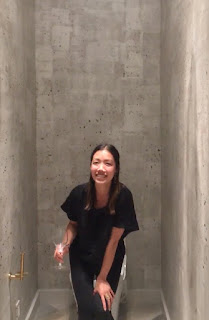 But luckily Riana caught the chandelier in a photo she took; it was hanging directly above her and really pulled the space together. That made no sense but go see the room and you'll love it!


I also marveled at Cecilie's choice of very hip furnishings and artwork:

There were a lot of great rooms to see including David Bjorngaard's (of the new Bjorn Design), Beth Martin's and the perennially chic bar done by Catherine Kwong.

Catherine did the Penthouse Living Room and Bar and holy cow they are gorgeous. The bar was so sophisticated, understated and luxe (the marble sink had no visible drain, the water escaping unseen beneath a small seam in the marble--you have to see it to appreciate it but then I have to warn you, you'll want at least one your home!).


And then there was the Living Room. It really was a triumph! The muted palette of a celadonish blue silver mohair platform sofa and the pastels and neutrals of the walls and rug were just irresistible. I've watched Catherine's work for quite a few years now and I'm not surprised she's becoming one of this town's hottest designers.


Lastly, the crowd at the Showcase included the glitterati of San Francisco's Design community including Diane Doranne Saeks, a huge contingency of my pals from the Wiseman Group (James, Shannon, Brenda and more!), Vernon Applegate looking very smart in greys and whites (ask him to explain that),  Cecilia Sagrera and George Brazil, and a ton of others who I'd list here but my diet pill is wearing off and I'm getting cranky.

Here's me and the lovely Holly Kopman, who's been a regular client and friend for-ugh-15 years although she looks exactly the same I swear!

All in all it was an uber fun evening ending in an Uber car home because I gotta lay off the Chardonnay.  I'd switch over to martinis but I have this fear of admiring the view (see below) from the roof and well, losing my balance and winding up pushing up daisies somewhere in Colma. And worse than that, SF Gate would call me an "older inebriated gentleman who thankfully won't be bothering us with any more silly blogposts like this one." :)

This was such a fun night! The rooms were fabulous, however, my favorite moment was posing under the chandelier with my wine in hand;)