A Pleasant Surprise: A Very Old Version of Buzz's Rules to Live By 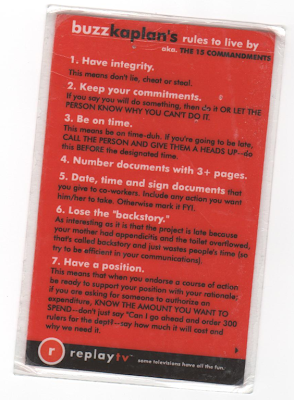 A while back I shared with you "Buzz Rules to Live By", a list I started about 30 years ago to make me a better person and employee (ah, the innocence of youth!).
Anyhow, in the category of "blasts from the past", just today a former co-worker of mine named M3 Sweatt (one of the few names even better than mine!) who's now a hot shot at Microsoft pinged me with a photocopy of the original Rules-the staff who I worked with back then had the list laminated into a little plastic wallet card that many of them (including this old friend) still carry around with them.
M3's message that I've had a positive impact on some of my friends and co-workers all these years later really made my day. Thanks M3!
And for those who'd like to see M3's blog (it's really great especially for the technoscenti amongst us), here it is: http://blogs.msdn.com/mthree/archive/2010/03/31/buzz-033110.aspx
Posted by Unknown at 3:29 PM

Brilliant! Isn't it amazing to revisit the "you" of years gone by and realize that you were wise, even back then!