The Village Ideata: WHAT'S VEDUTA IDEATA AND HOW DOES IT DIFFER FROM CAPRICCIO? 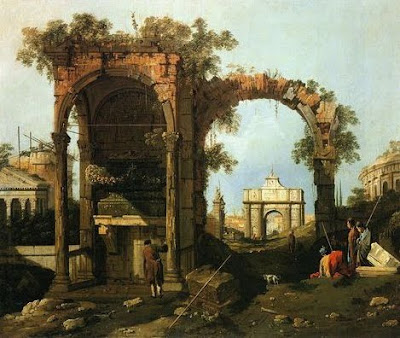 I should start by saying that "ideata" is NOT the Italian word for idiot. That would be "idiota" and I should know: in my flaming youth (!), I was thrown out of some of the finest restaurants in Rome for being a drunken idiota. So I'm an expert on this.
Relevant message from the Ad Council: Please drink responsibly.

Relevant message from The Buzz: Forget beer bongs...I'm not sure what they are but they sound like the first step to hard drugs and a life of ruin.
And speaking of ruins, that's what you typically see in capriccio and veduta ideata...but more on that in a second. For now, take a look at this example and see if you can guess what this genre is: 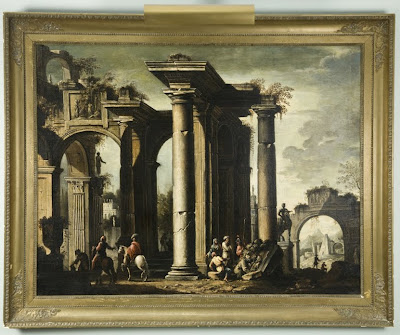 A capriccio (pronounced "ka PREE chee oh") is a painting that contains dreamlike or fantastical scenes. They most typically depict people frolicking among Roman classical ruins like this: 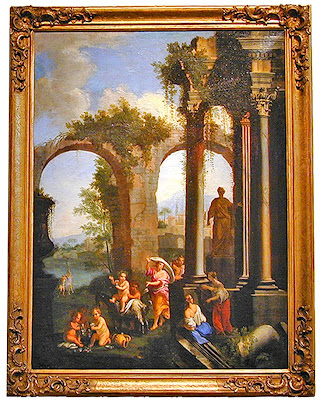 A "veduta ideata" (literally meaning an idealized view and pronounced "veh doo TAH - ee day AH tah") is exactly the same thing as a capriccio. They're synonyms.
Other things to note: The plural for capriccio is capprici (ka PREE chee) and they are sometimes called "caprice" (ka PREE chay) but I don't use that term. The plural for veduta ideata is vedute ideata ("veh DO tay - ee day AH tah") but again that's pretty esoteric. Here's another example of this genre: 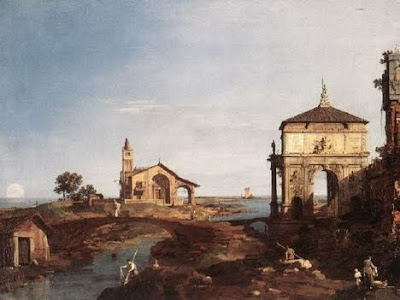 Finally, just to cover all the bases on these terms, a capriccio is also a MUSICAL term meaning a lively and free form piece of music, AND the name of an obscure 1942 German opera that you'll never see, AND also certain chamber music compositions.
Another factoid: these paintings came into vogue in 17th and 18th century Italy and the painters who created them were called "vedutisti", pronounced "veh doo TEES tee". Caution: "vedutisti" could be "very testy" (not unlike other fine artists).
And another fact: the most important vedutisti were Canaletto, Paninni, the Guardi family, and Piranesi. Here's a famous Canaletto: 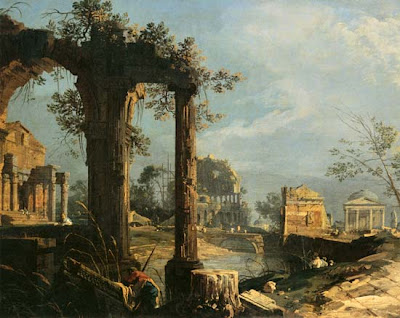 And here's a Piranesi (note that capriccio can be a print as well as a painting): 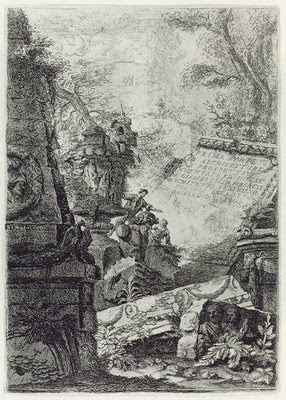 This was great! I learned so much! My brain has turned to mush and you're giving it a much needed work out. No more Idota for mee-uh!

Well I'm feelin' like an idiota after this lesson on veduta ideata! How ever did I get through life without this important information? Thankfully I now have your blog to save me from the terrible fate I might have experienced *swipes brow* prior to all this wonderful new found knowledge! Merci beaucoup, Grazie, Muchas gracias and a heartfelt Thanks ya'll! Vanna