Words of the Day: FAIENCE, FAENZA and MAJOLICA

The first word for today is FAIENCE, meaning French tin-glazed, low-fired earthenware.
It's pronounced "fay AHNS". So the emphasis is on the "AHNS", sort of like Beyoncé, only you add the fay and drop the say.
Oh--and also drop the "bee". OK, you're right, they're not alike at all. Never mind...
Here's a photo of me with one of our very happy (he's smiling!) 18th century faience lions (I'm actually the one on the left--I've had lots of work done...Do you think it's too much?): 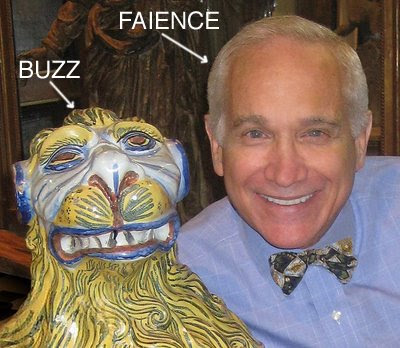 This faience pair are quite extraordinary because they were most likely commissioned for the French Royal Hunting Lodge in Rouen around 1755: 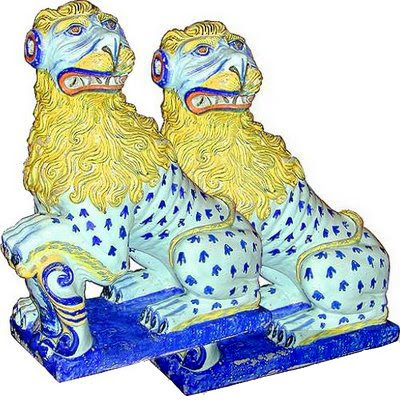 List price: $85,750 USD
So now we know that when you say faience, you're describing French pottery or statues that are glazed terra cotta like the ones above.
But what if you're talking about Italian glazed earthenware? If it's Italian (or English for that matter), it's not called faience, it's called MAJOLICA (pronounced "muh JAHL ick Kuh") from the Italian town of FAENZA. Faenza was a leading pottery center during the 15th and 16th centuries. Here's a beautiful set of Italian Montelupo majolica plates: 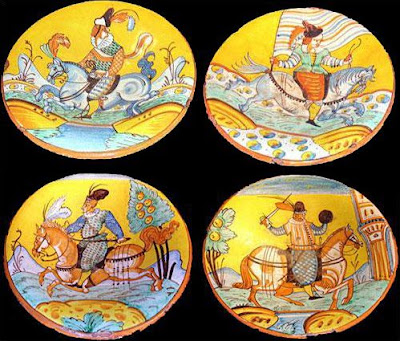 I love these. They'd be great in a Tuscan interior. Rustic but elegant. List price:  $28,000 USD
And by the way, the French came up with their word "Faience" from the Italian town of Faenza. And thus we come full circle and...The End.
Posted by Unknown at 2:20 PM

That was really funny. Thanks for the laugh Buzz.