HOW LEGS CAN HELP IDENTIFY ANTIQUE PERIODS AND STYLES

Here's a reprint of the Decorati Magazine article on Antique Leg Styles, in case you missed it.

Can you tell how old an antique is just by the shape of its leg?

Well, no, not the exact date it was created, because classic leg designs are copied to this day. But a leg CAN tell you when a style was first introduced and that is one important step in identifying an antique's age and period.

Look at this leg: 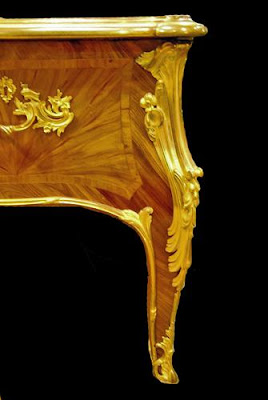 It's shapely curves identify it as a cabriole (pronounced "CAB ree ole") leg and that type of leg was first introduced in the 18th century. The prototypical cabriole leg was introduced in the Regence period in France and was refined/perfected in the following period of Louis XV rococo.

But that doesn't mean this piece of furniture was made in the 18th century. In fact, it is a Louis XV revival desk made in the late 19th century, most likely by the renowned Parisian copyist T. Millet. To antiquarians, this desk would be called "Louis XV style", "in the taste of Louis XV", or "19th century Louis XV". Those phrases tell you it's later than the mid-18th century.

So does that mean it's a crummy antique? Definitely not. Some of the 19th century copies of 18th century styles are even more valuable than the older pieces. They're just different and must be judged on their own merits.

This particular 19th desk is extremely valuable and would list for more than $200,000 USD: 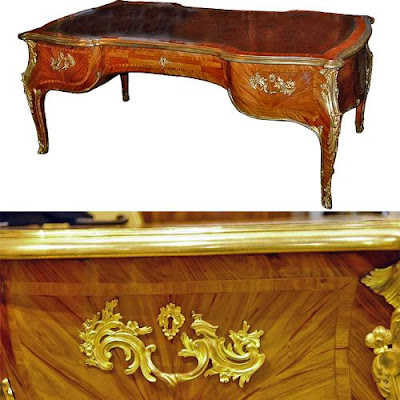 But the leg design does allow us to identify the historical style (in this case, Rococo) and that's an important piece of information in understanding and describing a piece.

Here are other leg styles that can help you do the same: 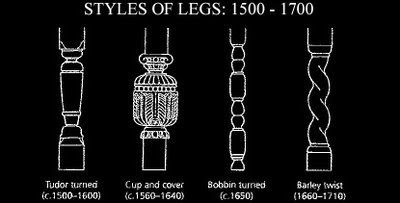 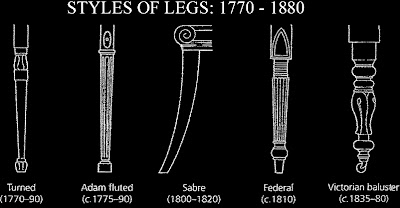 One final comment: in the first chart above you see the leg design that looks like a cruller doughnut (see a cruller below-yum): 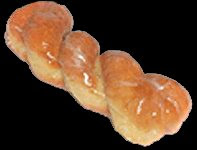 It's that twisty design...everyone wants to know "Why is it called 'barley twist' or, as commonly, 'barley sugar twist'?"

The answer is that in the 19th century, a favorite candy was a sweet barley sugar twist stick and it looked just like this 17th and early 18th century leg--and the name stuck! Go figure.

See my post on Why can't Antique Dealers Talk Good English.
Posted by Unknown at 11:55 AM

HI Buzz, Has anyone ever made learning antique furniture history so much fun as you do? I don't think so. I learned from John Stair in NYC but he doesn't hold a candle to you!! Affectionately, Miss Martha Angus