Word of the Day: MEDICI

I'm always amazed at how many people ask me, "Hey Buzz, how do you pronounce Medici. Isn't it "med EE chee"?
Not exactly (but a good try). MEDICI is pronounced "MED uh chee" and it's the name of one of the most historically and culturally important families in art history. The Medicis were a powerful Florentine banking family from the 14th to the 18th century. They were patrons of the arts and sponsored some of the greatest artists ever, including Michelango. Below is the Medici crest:

The Medici's had no less than three Popes in the family (if you've got a Jewish mother, that's like having a doctor, a lawyer, and a dentist) along with numerous rulers of Florence, including "Lorenzo the Magnificent".
Here's Michelango's sculpture of Lorenzo de Medici, at the Basilica of San Lorenzo, Florence: 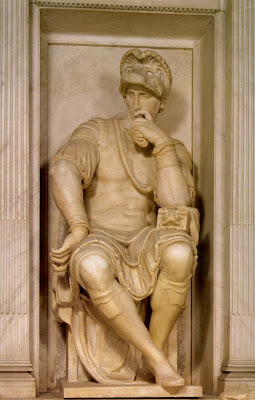 By the way, once the Medici's had their Papal connections established, they added the keys and the Papal crown to their family crest: 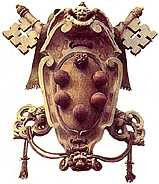