Word of the Day: BUREAU

You'd think the word bureau would be pretty straightforward, right? But alas, no my pet. That would make life much too enjoyable. In antique jargon, bureau means different things depending on what continent you're on. And then when you figure out where you are and what you need to say, then you've got to figure out all the variations of bureaus that have additional names. Ugh, an antique dealer's job is never done.
Let's start with just the word BUREAU, pronounced "byoo ROE". In Europe and England, a bureau is a writing table or a desk. But in the U.S., many people (but not us antique folk) say bureau to mean a chest of drawers (which we now know from the prior post that we call this a commode).
But I'd be remiss if I didn't tell you that there are many different kinds of bureaus. Here are the most important ones:
Bureau à Cylindre, pronounced "..ah see LAN druh", from the French meaning a cylinder front desk (Gramps probably called it a roll top desk). Here's one: 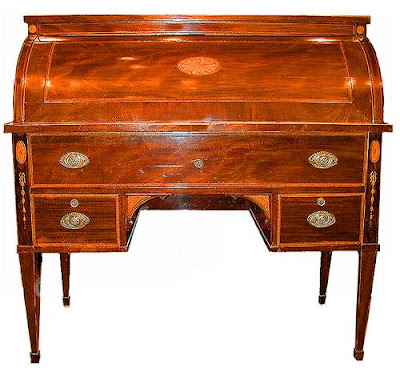 Bureau à Dos d'Ane, pronounced "...ah doe, a dear, a female dear"-sorry, I have tourette's syndrome but only when it comes to show tunes; this desk is really pronounced "...ah doe DON" and comes from the French meaning literally a "donkey back bureau", which is a small desk designed for ladies, usually with a slant top front that folds down for the writing surface. Here's a Chinoiserie example: 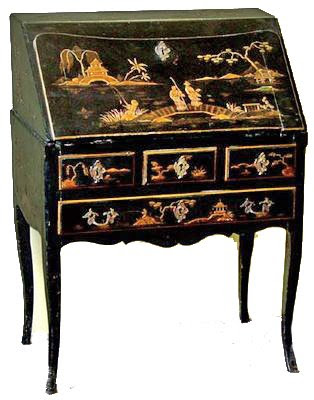 List price: this piece is currently in a private collection and unavailable for sale.
Bureau à Pente, (also less frquently called a bureau de pente), pronounced "ah PAHNT, from the French and meaning any slant front desk, like this one: 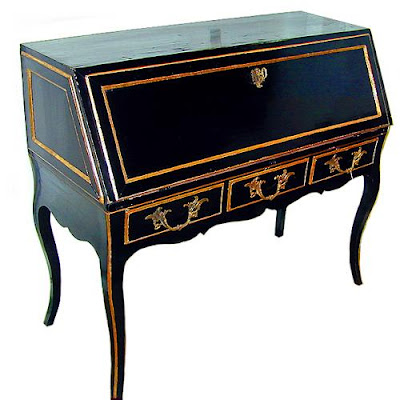 Bureau Ministre, pronounced "...mee NEES struh" and meaning a large kneehole desk. Here is a truly crummy copy of an antique Bureau Ministre (I don't have any in inventory right now): 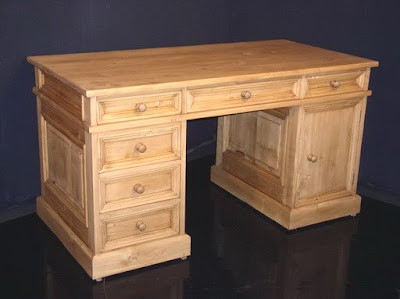 List price: You couldn't pay me to take this piece.

Bureau Plat, pronounced "...PLAH". It is the predecessor of all modern desks, created by Andre Charles Boulle during the reign of Louis XV (Boulle outlived Louis XIV) and is basically a large flat writing surface desk with one drawer below the top and one or two drawers flanking it and raised on four legs. Here's a bureau plat: 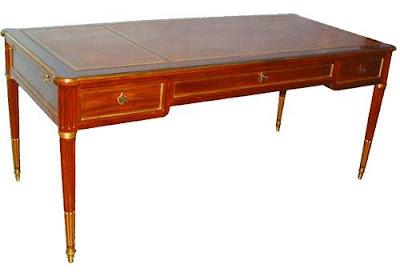 But hey Buzz! What were the desks called BEFORE the Bureau Plat was invented? Well, bureaus is the simple answer but specifically the 17th c. Baroque Bureau Mazarin (pronounced "MA zuh RAN") named after Cardinal Mazarin in the mid 17th c.) and having 8 legs and mutiple drawers. Here's a jaw dropping bureau mazarin inlaid with ivory and pewter: 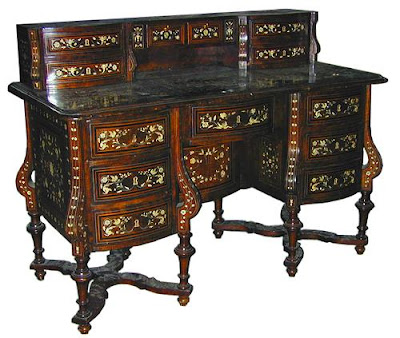 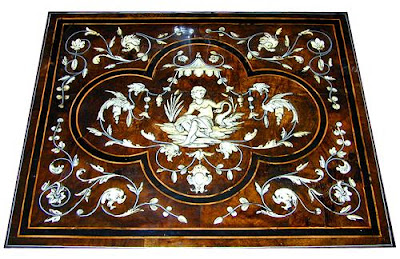 Very interesting. We unwashed masses would use the word "secretary" to refer to the items pictured in the top three photos. The Bureau à Pente is my favorite. I could see myself paying bills or writing thank you notes on that one. Of course, for that kind of money I could just hire a real secretary--with equally nice legs--to handle my correspondence for an entire year.

Excellent piece on CON-sole, as well.