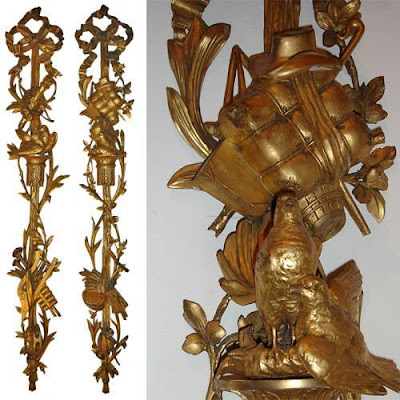 List price: $59,000 USD the pair
In an earlier post, I cautioned against embarrassing yourself by confusing Donald Duck's nephews (Louie, Dewey and Huey) with the three French Bourbon king styles known as Louis (yes pronounced Louie) XIV, XV and XVI.
The Fleur de Lys (pronounced flur DUH lee), shown below, was the emblem of the Bourbon kings: 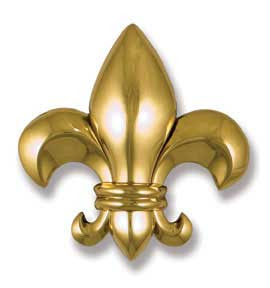 But then I got this disturbing email:

Dear The Buzz on Antiques,
I attended a VERY important black tie gallery opening last night.
And the cocktail chatter eventually turned to antiques.
So I started using some of your esoteric French terms (I HAD to because I'd told everyone earlier that I spoke fluent French and graduated from L'Ècole des Beaux-Arts) [note to readers: this is pronounced "lay cole day boze AHR" and is a Parisian school of fine arts]. But the truth is I'm still working on my AA at Chico State and only speak "un poco" Espanol.
Anyhow, so I said "The most très chic furniture period is Louis XVI (and I pronounced it like you told me "Louie the 16th").
And then Bettina Vanderlip (of the Newport Vanderlips) said "That's MOST interesting....but Louie says is too neoclassical and I much prefer the baroque." So I said, "Bettina dear, if you're broke, it's probably because you're listening to everything that Louie creature says."
And then suddenly everyone looked at their watches, squeaked "Oh look at the time!!!" and ran for the exits.
Did I do something wrong?
Signed,
Myndi from (I'm embarrassed to say) Van Nuys, California

Dearest Myndi,
You did nothing wrong. What you did was something stupid, which is slightly different. But I'll get to that in a second.
My first piece of advice to you is just be yourself (this has nothing to do with antiques but I sense your email might be a cry for help).
Next time, start by saying "Hi, I'm Myndi and I'm a proud high school graduate from Van Nuys." You can also say "Did you know that Robert Redford, Paula Abdul, and Marilyn Monroe also went to Van Nuys High?" Not that it matters but it may come in handy if no one says"Hi" back (which is distinctly possible).
My second piece of advice is that if you absolutely cannot be yourself because you're in some Federal witness protection program, then go ahead and lie your head off and best of luck in high society.
Besides, at art gallery openings everyone from Van Nuys is allowed to say "I'm originally from Manhattan, summered in the Hamptons, went to Miss Porter's and graduated from L'Ècole des Beaux-Arts."
Where you went wrong at the party was using your Spanish training to decipher what was being said in FRENCH. Yes, Louis XVI is pronounced "Louie the Sixteenth" but it's also pronounced "Louie SEZ" because 16 is "seize" in French. And "baroque" is pronounced "buh ROKE", not "broke."
So Bettina was just saying that she thought Louis XVI neoclassical style was less appealing than the baroque (at which point you could have chimed in with, "Bettina, I agree, Louis XIV [which is baroque] is also MOST interesting to me" or some such other drivel that might score you points with this crowd).
And that brings up a good educational point for the rest of us: Just like Louis XVI is also called Louis Seize ("Louie SEZ"), Louis XIV is also called Louis Quatorze ("Louie kah TORZ") and Louis XV is also Louis Quinze (pronounced "Louie KANZ"). So now you know and vaya con dios.
Sincerely,
The Buzz, another out and proud graduate of Van Nuys High
P.S. I never heard of the Vanderlips but I'm sure they're a perfectly lovely family.
Shown below: An 18th c. French Louis XVI neoclassical pier mirror: 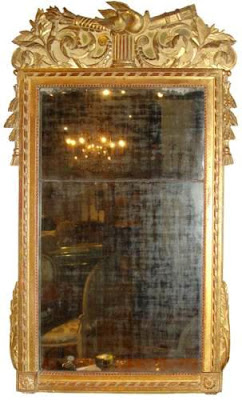 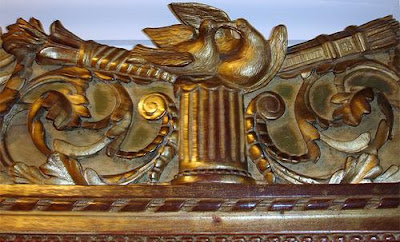 what a breath of fresh air to find you.. i will love learning more about all of these beauties...i have been collecting since i was 16....

If you've been collecting since you were 16 you're going to be very wealthy when you're 60 (presuming you aren't over 60 already)...and thanks for your comment.