The history of antique English tortoise shell tea caddies is a tale of intrigue, drugs, prestige and power. Just like MTV's The Real World Brooklyn only classier.

Tea caddies in the 18th and 19th centuries were the ultimate status symbols because tea was prohibitively expensive and stylish, as detailed below. In fact, it was so valuable that the upper crust gave their used tea (called "slop") as a gift to their appreciative servants. And once the servants had re-used the tea, they would cut it with cow manure and resell it to the peasants who wanted to taste the high life too. 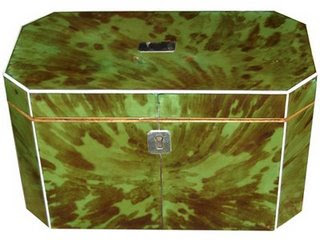 Green tortoise shell is the rarest color, followed by blond, then red and then sable. There is no such thing as a green tortoise. The color is imparted by a painted green bole layer under the translucent shell.

Although there aren't any green turtles, there are in fact blonde ones. They live mainly in L.A.

But back to our tale: Throughout history, the Kings and Queens of England rarely set style trends for their subjects (unlike European Royals like the Bourbon Kings of France). But beginning in the late 17th c., Charles II (who grew up in tea-drinking Holland) and Queen Catherine of Braganza were aggressively promoted as cool, cutting edge tea drinkers. And the same was said for later royals, like Queen Anne around 1710, who preferred tea over ale as her favorite breakfast beverage.

But why promote tea at all? The reason was surprisingly sinister: The Crown was generating huge revenues from its high taxes on imported tea. So the more tea sold meant the more revenue generated for the Crown. In fact, these high taxes caused the price of tea to skyrocket and for some years made it on par in value with gold. As such, the English were able to fund their Empire-building on the on the mania that was "tea time". 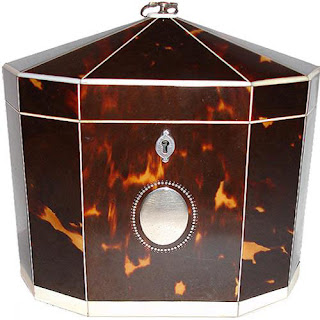 The astronomical price of tea made it a tremendous status symbol and hence it was displayed prominently in caddies for all to see (but not touch as the caddies were kept securely locked against pilferage). And to preserve the freshness of the precious tea, the interior compartments were lined in lead. This created marvelously fresh tea but sadly dead tea drinkers (who died blissfully unaware that lead is toxic).

An interesting aside is that this same high price of tea is what led to the 1773 Boston Tea Party in America, where the colonists protested the astronomical taxes on the commodity. 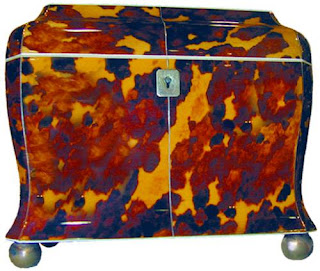 But the story gets even more sinister: the English Monarchy was not only building its empire on tea taxes, it was also buying the tea at pennies on the dollar (er, pound). How? By paying the Chinese (China was the source for virtually all tea at that time) for the tea not in sterling but rather in exchange for England's cheap cash crop from colonial India: opium.

So the English knowingly introduced widespread opium use to China in order to support and grow its tea trade. Shocking but true.

By the 1830's, opium addiction had reached epidemic proportions in China--opium dens were springing up like weeds (poppy weeds to be exact). Around that time, even the Emperor's son died of an overdose and the importation of opium for tea was outlawed.

This importation ban infuriated the English and led to a declaration of war against China to keep the trade lines open. That conflict became known as the Opium Wars of 1839-1842. England ultimately won (the Chinese were too loaded to fight back) and the English got Hong Kong as the booty (that's a big booty). But by then tea was being harvested from many countries and so the price of tea gradually collapsed in spite of the victory.

Interestingly from an antique perspective, as tea prices declined, people were able to buy more tea than ever before- and that led to the tea caddies getting bigger and bigger. Take a look at this jumbo one from 1868 measuring a full 14" wide, 8 1/2" high, and 8" deep-that's a LOT of tortoise and lists for $71,500 USD: 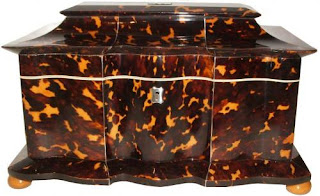 This specimen is so large that it has a crystal sugar bowl between the tea compartments (one compartment was for black tea and the other for green): 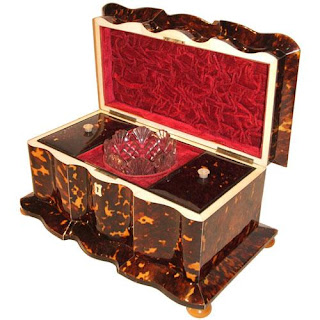 Thank you Buzz, you are so informative- and hilarious! This is all so wonderful to know. I have clients who collect tortoiseshell tea caddies and now I know why they are so valuable!

No one tells a story better than you!!! Thank you for all of the valuable information.

Wow, what a wealth of knowledge and too funny!!! Great work Buzz!!