MAGGIOLINI COMMODES AND THE PIZZAS THAT LOVE THEM

Maggiolini's. Yum. It was my favorite pizzeria when I was growing up in Van Nuys. 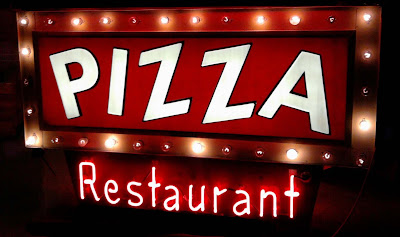 Unfortunately my parents freaked every time I went there because they associated pizzas pies with Italian Catholics and they didn't want their little Jewish prince (me) corrupted by "THEM EYE-talians." 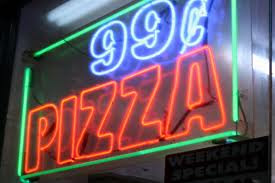 They said they had to protect me from "those people" because they worshipped the Devil (!). Wait till the Pope hears that one (not gonna be a happy Pontiff). Anyhow, they also told me that when the Italians weren't busy prostrating (prostating?) themselves to the Prince of Darkness, they did witchcraft. Who knew? Probably only my parents. 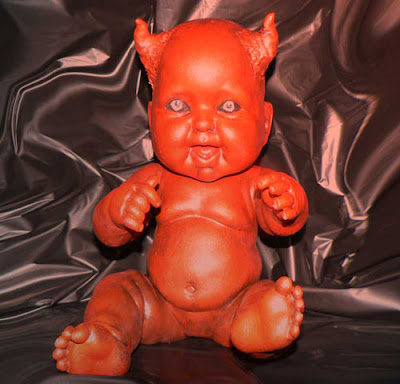 But in their defense, my folks were actually very nice people-but alas, they were born in a galaxy far far away (New Bedford MA). They sincerely thought they had solid evidence of all this malarkey. My mom once read a magazine article about a pizza pie in Indianapolis that mysteriously came out of the oven with the Devil's pentagram on it (it's kinda his logo). How ridiculous is that? 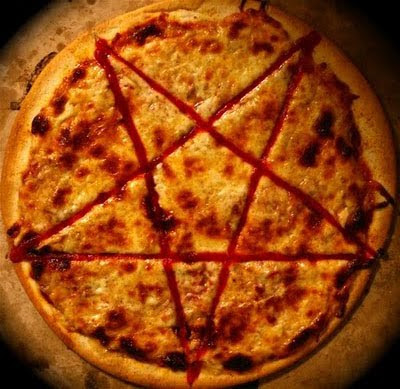 OK fine! So there's actually a picture of the Devil Pizza. Doesn't prove nothin' (or anything either).
I mean think about it: Why would the Devil choose to communicate by writing on pizza pies? Hasn't he heard of engraved stationery? And how about that Internet thing, Pops? AND why would the Devil decide to talk to us from Indianapolis? I've been to Indianapolis and I can tell you it's not Hell. Pretty close, but not quite.
Anyhow, I went to Maggiolini's alot and fondly remember the first time I had anchovies, mushroom and pineapple toppings--all together. Ewwww. It was disgusting but I like to think of it as a culinary milestone in refining my sophisticated epicurean palette. 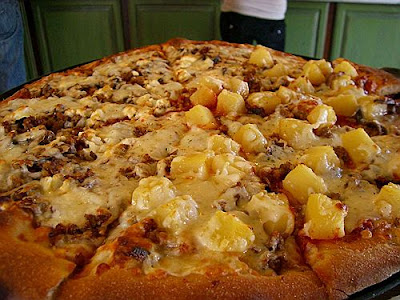 I also remember that I used to get free slices all the time because I went to school with Tony Maggiolini, the owner's delinquent son who worked there part time. He's in state prison now, but not for anything relating to pizza. Don't ask.
Uh-oh. Hang on a sec...lemme think about this...CORRECTION: Tony's pizza place wasn't called Maggiolini's-it was called Mazzarino's. Duh. Sorry, please just ignore everything you just read cause I need to start over.
OK, so the antique topic for today is Maggiolini commodes. 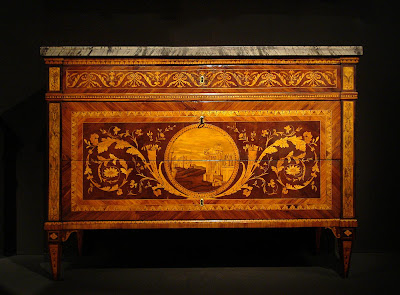 Maggiolini (pronounced MADGE-ee-oh-leen-ee) is a generic term in the antique trade for a certain type of Neoclassical marquetry (and less frequently, parquetry) commodes and other furniture pieces that were originally created by one of Italy's most famous furniture artisans, Giuseppe Maggiolini (1738-1814). 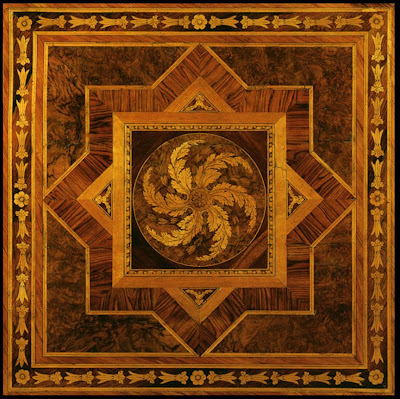 NOTE: As with many terms used in Antiqueland, some people feel the term Maggiolini should only be used to reference original pieces by the master himself--well, and his workshop; pieces made by other artisans they would call "in the manner of" or "in the style of" or "in the taste of" or "why don't these elitists just get a life"? Anyhow, I'm not one of them and most of my dealer counterparts and collectors use the term Maggiolini to denote the distinct style of commode as described below. 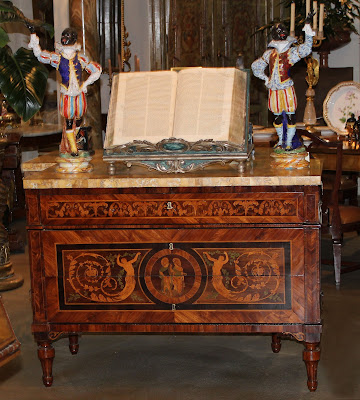 Most typically, Maggiolini's name is associated with a certain distinctive type of commode. These chests of drawers exhibit the most intricate and exquisite marquetry (and parquetry) designs and these designs cover the fronts of the two large case drawers which are always sans traverse (so that the inlaid imagery/pattern is not interrupted by a horizontal rail support). 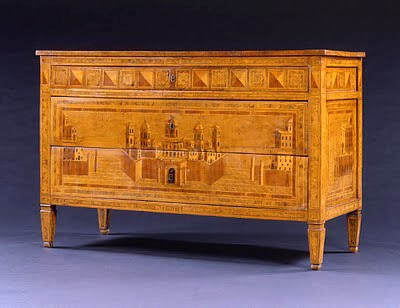 Original Maggiolini commodes are extremely rare and bring astronomical prices both at auction and through dealers like ourselves. The vast majority of antique "Maggiolini commodes" are actually in the Maggiolini style but the antique ones are also very costly and quite rare. Many of these commodes were made contemporaneously with Giuseppe Maggiolini because his style was renowned and copied even during his lifetime and well into the 19th century after his death. 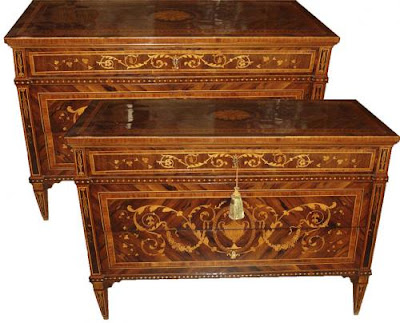 Maggiolini commodes usually have inlaid wood tops although many also have marble (the Italians have this tendency to favor wood tops over the French taste for marble) but either way they're still generically called "Maggiolini" as long as they have the following: One key characteristic these chests of drawers are their intricately expressive inlaid pictorials and patterns. 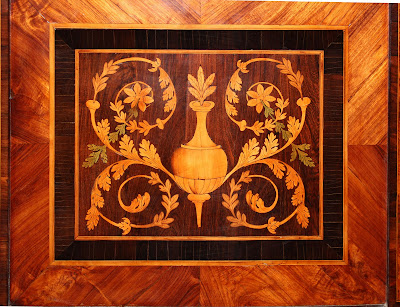 Another is that these designs must also cover the two large case drawers. A third is that these two drawers must always be san travers. Finally, all Maggiolini commodes incorporate a wide array of exotic woods. Maggiolini himself used up to 82 different species on a single piece. 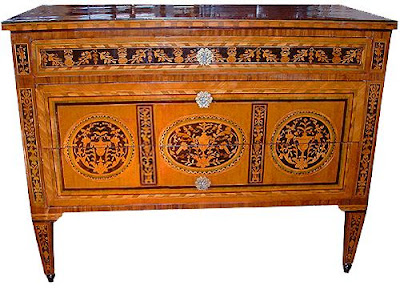 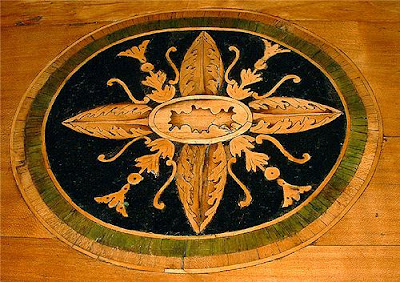 AND NOW......For those of you who have absolutely nothing to do, here's everything you'd ever want to know about this cabinetmaker but were afraid to ask. My recommendation: Skip the rest of this post because it's really boring and you don't need to know this stuff anyhow: 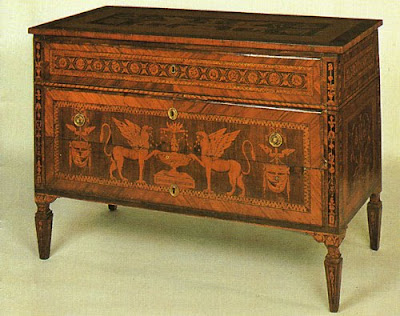 Giuseppe Maggiolini was born in Parabiago, near Milan, in Lombardy, Italy and prior to opening his own workshop, was employed as a carpenter for the Cistercian monastery of Sant’Ambrogio della Vittoria in Parabiago. 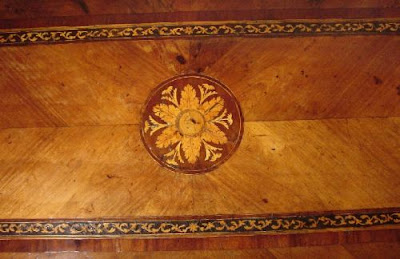 His first major commission was for Villa Litta, owned by the marchese Pompeo Litta. This led to other important assignments, particularly from Archduke Ferdinand of Austria (who I thought got shot in Sarajevo in 1914 but he must have been the OTHER Archduke Ferdinand of Austria-I don't know and frankly I don't care), Stanislav II Poniatowsk, King of Poland (don't get me started); and later from the Bonaparte family.
Maggiolini's designs were often based on the drawings of Levati and painter Andrea Appiani, and included classical motifs such as “trophies" of musical instruments, cornucopia-like scrolls of acanthus leaves, ruffled ribbons, tendrils of ivy and bunches of flowers, as well as more strictly antique architectural motifs. Yawn, who needs Ambien when you have The Buzz on Antiques?
Posted by Unknown at 3:55 PM

Beautiful pieces. I did't know there was a special term for this specific style of chest. I would love to have one of these in my entry hall.

As always, Buzz, thanks for the lesson and the glorious photos! Nice to have you back. OK. I'm going to stop salivating now.