When I first heard of a "bras de lumiére" (pronounced "brah duh LOOM myair"), I figured it was one of those kinky LED brassieres that lights up in the dark. I remember thinking "What WILL Parisian couture come up with next?!"
So this is a multiple choice question. WHICH OF THE FOLLOWING IS A BRAS DE LUMIÉRE?
A. 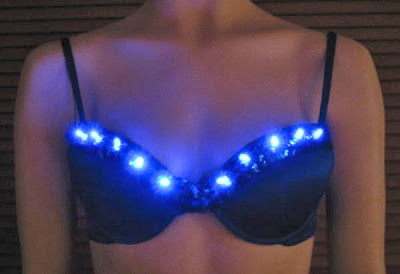 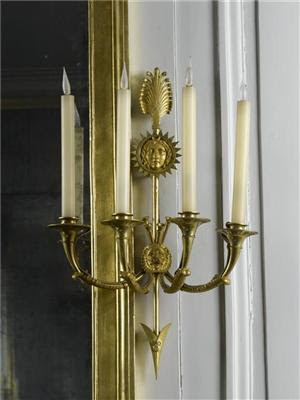 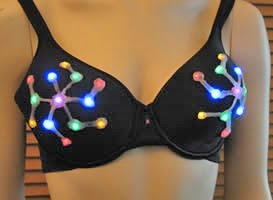 The answer in a moment.
So later I grew up and learned more about how brassieres differ from antique lighting. One factoid I learned was that a bras de lumiére is not an undergarment at all (go figure) but rather a type of sconce; so the right answer is "B".
But now you're probably wondering "Well that's just ducky Buzz, but what the heck's a sconce?" Good question.
A sconce, pronounced "skahnz", is a wall mount that is fitted to hold a candle or candles. Here's a typical pair of 18th century Italian giltwood wall sconces: 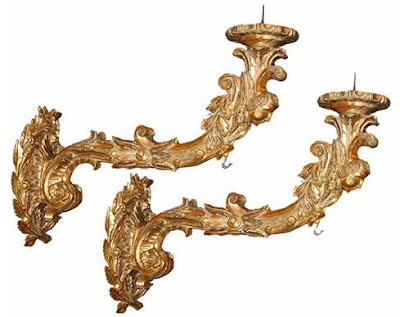 And here is another example, this one an amazing set at our gallery: 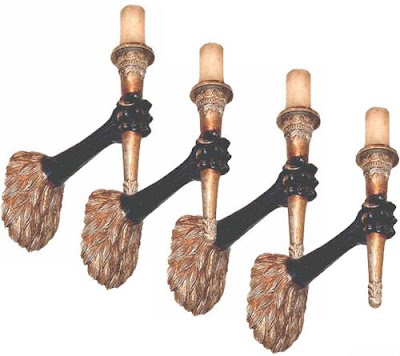 Aren't these wild? I love 'em.
When a simple wall sconce has multiple candles and is more elaborate and complex in design, it's called a bras de lumiére, as seen here: 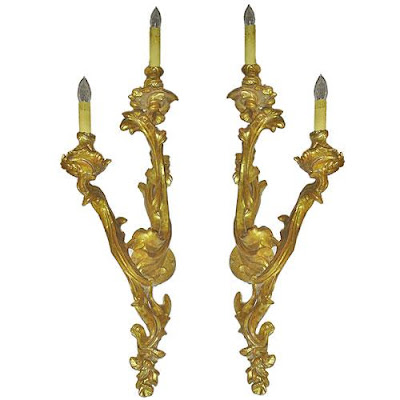 And they can become way more foofy like this Empire one, part of a set of six at C. Mariani: 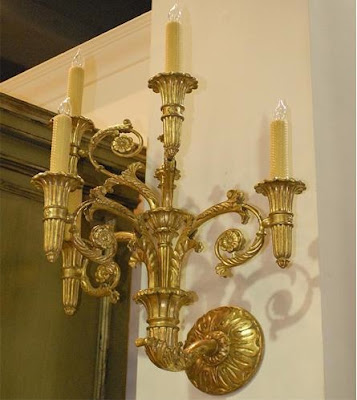 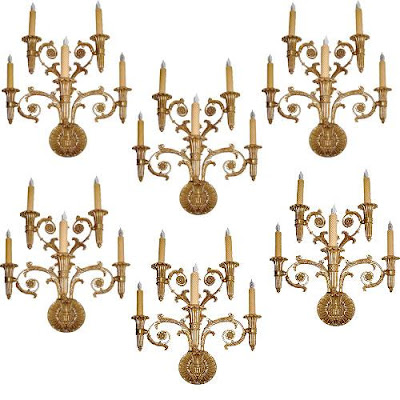 But people in the trade use the word "sconce" to mean a whole variety of things that hang on walls. Most of these items are properly called wall appliqués (pronounced "AP luh kays") since that's the generic word for just about any item that mounts up on a wall.
A good example of an appliqué that everyone calls a sconce would be this bracket/shelf and others like them: 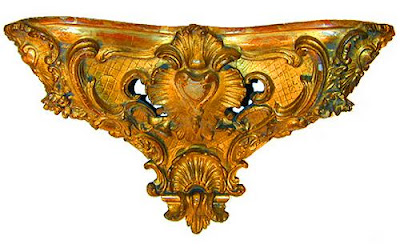 These types of pieces are more properly called wall brackets and, although they were indeed used to hold free-standing candlesticks, they were more frequenty used to display porcelain vases, figures, girandoles (I'll cover girandoles in my next post!), other objet virtu etc.
Here's another set of these versatile brackets that are great for flanking mirrors or to embellish a small wall area: 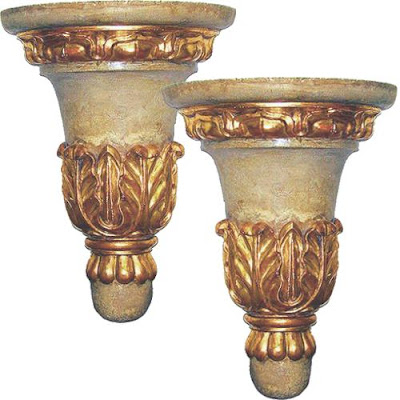 Love your blog! Gotta ask a question though.

I see the term "giltwood" used pretty frequently, sometimes to describe items I don't think are actually made of wood. If the gilded piece isn't wooden -- for example, if it's plaster -- what's the proper gilt____ word . . . if there is one?

If the gold leaf is on plaster, then you'd call it "gilded composite".

Or if it's gilded bronze, then you'd call it ormolu. Or for gilded metals generally, you could use the more generic "vermeil" (pronounced "vair may") that describes bronze, silver or brass that's gilded.

Who doesn't love a fabulous blog that uses words like "foofy" and "girandoles" in the same post? I love it!

It was rather interesting for me to read the post. Thanx for it. I like such topics and everything connected to them. I would like to read more on that blog soon.

Fabulous Wall Sconces! Nice work! Thanks for doing this blog. I absolutely love it!