WHAT'S MORE FUN: A LAP DESK OR A LAP DANCE?

A truly thought-provoking, timely (after all, our morals are under siege), and very deranged question. But I have no shame so I'll answer it.

This is a 19th c. French fruit wood lap desk:

Let me begin by saying that I'm no expert in lap dances. I've never actually had one. And I don't recall ever having given one. But I have seen them on "Housewives of Atlanta" and "Shahs of Sunset" so I do get the concept.

OK, so we agree that I'm clueless about lap dances. ON THE OTHER HAND, I'm cluefull about lap desks. In fact, I own one and I enjoy it a LOT, mainly as a decorative accessory. 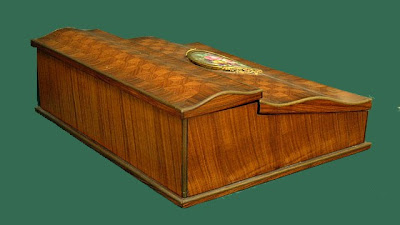 Given both my knowledge and lack thereof in these two areas, I'm going to go out on a limb and say that lap desks and lap dances are BOTH fun, just different kinds of fun.
But what's my definitive answer as "The Buzz", the antique expert guy who has a huge kiddie following (I've been told that as many as one to two "tweens" have mistakenly landed on my site after Googling "How to get a Buzz on")?
To those youngsters, I say "Just Say No to Drugs and Yes to Antiques". Both will cost you plenty but at least with antiques you won't have to listen to your Mom whine. "ARE YOU ON SOMETHING AGAIN?" Now that I think about, she may ask you that in either case. But let's get back on topic: lap desk vs. lap dance-what's funner? 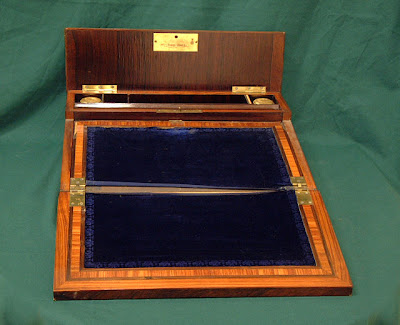 Given my quest to take the high road, maintain a "touch of class" here, and having zero experience in lap dances, I'm going to say that lap desks are the much preferred type of fun for kids of all ages. They are also my personal pick for that "hard to find' gift" for those very special occasions like your 10th wedding anniversary (plan on your wife kicking you out when she sees the gift. But look at the bright side: you had 10 years of wedded bliss before she mercifully put an end to it).


So here's the argument for the fun of lap desks: before the advent of Twitter, people couldn't Tweet. Or for that matter phone, type, telegraph, email or text. But what they could do, dare I say, is WRITE to one another both for business and pleasure. 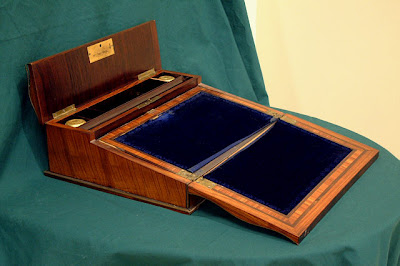 And writing was considered something of an art form both as to penmanship as well as content. And lap desks allowed people to write letters to each other from wherever they were, either from home or while traveling. And this was a big part of their recreational not to mention business lives. 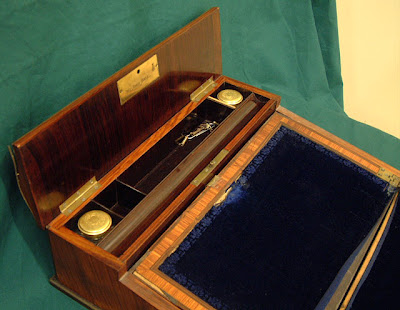 During the 18th and 19th century, lap desks — also known as writing boxes, writing slopes, writing cabinets, or writing desks (as Jane Austen called hers) were used for writing from home (where they were placed on tables), or at your country manor house or retreat, as well as when traveling via land or sea.

People of means traveled between homes, offices and resorts frequently and this led to the widespread use of these portable desks. Most of these desks took the form of a box with a sloping lid (that would fold down to create a stable writing surface) which could be used for writing not only on a table but also on one's lap, hence the name “lap desk”. Lap desks themselves were always personal items reflecting the tastes, style and social class of the owner. 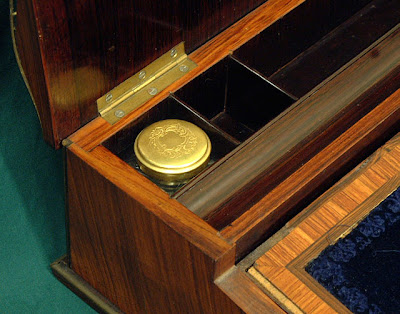 They were generally made of mahogany, walnut, or fruitwood but the finest examples were created in exotic materials like horn, ivory, bone or lacquer. Here's one made of elk horn with carved and inked Anglo-Indian ivory detailing on the interior: 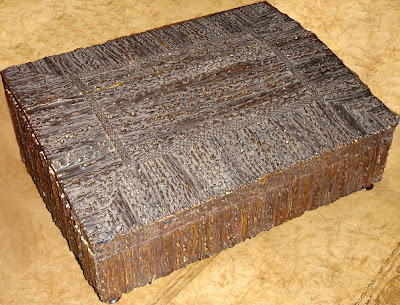 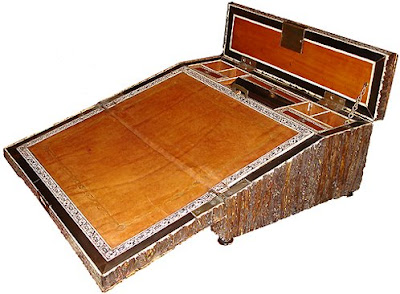 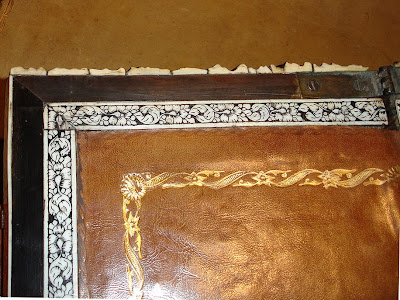 Lap desks not only provided a writing surface but also had compartments for paper, ink, and sealing wax, so they really served as a modern day briefcase for many people. Here's a Japanned lacquer lap desk: 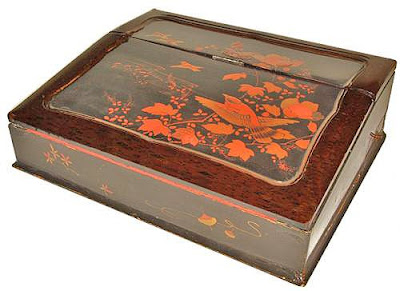 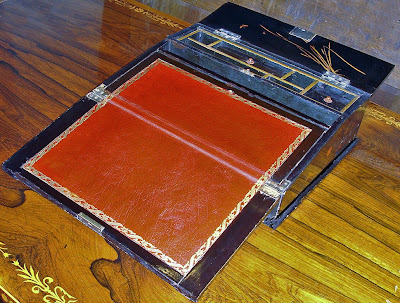 So before Twitter, email, texting, telegrams, typewriters, and other modern ways to communicate, the written word was the communication of choice and the lap desk was a valuable possession for every cultured individual who could write and travel regularly.
Posted by Unknown at 9:19 AM

very informative and it made me chuckle!